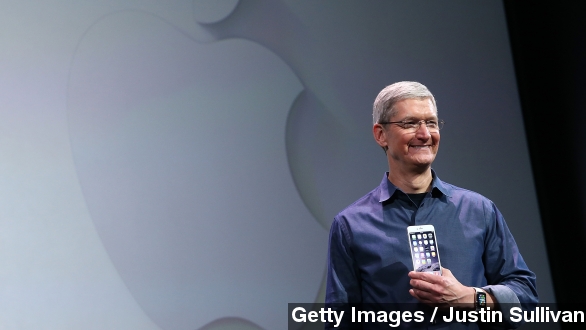 By Cliff Judy
October 30, 2014
Cook's op-ed for Businessweek published online Thursday morning is hugely significant, evidenced if nothing else by the apparent crash of the website.
SHOW TRANSCRIPT

One of the most powerful men in the tech and U.S. business industry Tim Cook has announced he's gay.

In a 10-paragraph op-ed for Businessweek published early Thursday morning, the Apple CEO wrote, "While I have never denied my sexuality, I haven’t publicly acknowledged it either, until now. So let me be clear: I’m proud to be gay, and I consider being gay among the greatest gifts God has given me."

The reveal is hugely significant, evidenced if nothing else by the apparent crash of Businessweek's website and the article only minutes after it was posted.

When standing in the shadow of the most valuable company in the world, there's little ability to keep your entire personal life out of the public eye. Cook's sexual orientation has been the subject of rumor and discussion— as this Gawker headline from 2011 clearly shows.

JIM STEWART, THE NEW YORK TIMES COLUMNIST: "Not one would allow to be named."

SIMON HOBBS, CNBC ANCHOR: "Well, I think Tim Cook is fairly open about the fact that he's gay at the head of Apple, isn't he? Oh, dear. Was that an error?"

Cook's leadership of Apple — which started in the unenviable position, by the way, of having to be Steve Jobs' successor — has been largely viewed as admirable. (Video via YouTube / Martin T)

The company continues to lead the tech industry on seemingly all relevant fronts. Cook, of course, unveiled Apple's latest iPhone models last month along with specs and a release date for Apple's venture into wearable tech with its smart watch. (Video via Bloomberg & Apple)

Cook finished his op-ed noting two pictures of Dr. Martin Luther King, Jr. and Robert F. Kennedy greet him when he arrives to work each day, though he said his announcement certainly doesn't make him their equal.

"All it does is allow me to look at those pictures and know that I’m doing my part, however small, to help others. We pave the sunlit path toward justice together, brick by brick. This is my brick." You can see the full article on Businessweek.