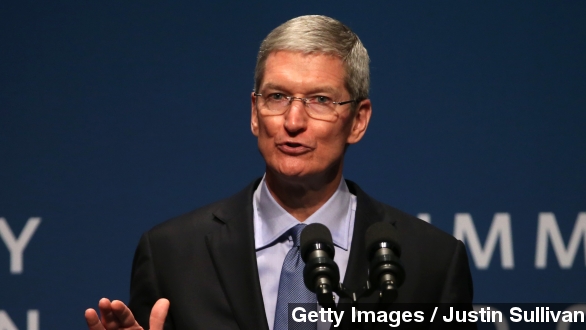 SMS
Apple CEO Takes Shots At Facebook, Google During Tech Summit
By Ben Lawson
By Ben Lawson
February 13, 2015
Apple's CEO took a few easy shots at Facebook and Google for something that gets on everyone's nerves: selling personal data to advertisers.
SHOW TRANSCRIPT

Apple's CEO Tim Cook showed up to the White House's cybersecurity summit on Friday ready to get down to business.

His speech focused largely on the importance of both businesses and the government protecting privacy. But Cook also managed to work in a few jabs aimed at some other tech giants.

"We have a straightfoward business model that is based on selling the best products and services in the world, not on selling your personal data," Cook said.

That's a pretty blunt shot at Google and Facebook, which have been the subject of many privacy scandals over the past few years.

And it's a pretty easy shot for Cook to take, since Apple's line of smartphones, tablets and computers are among the best-sellers on the market.

Apple's products don't rely on the often-controversial targeted advertising which makes up such a huge part of Facebook and Google's business model.

It's true that Apple hasn't found itself in the hot seat for data-mining its customers. But the company's track record on privacy isn't exactly crystal clear, either.

Cook did explain how Apple had a dedicated team working to protect user security and privacy. (Video via CNN)

But Cook's speech glossed over the infamous iCloud hack from last year, which resulted in nude photographs from dozens of celebrities being posted all over the Internet.

That incident had Apple scrambling to bolster security and recover from a ton of bad press.

Regardless, all the major tech companies did seem to be taking a stance on the government's role in cybersecurity at the summit – mostly by not showing up.

Cook was the only high-profile tech CEO at the summit; every other major tech company gave President Obama the cold shoulder and didn't bother to send a high-ranking exec.