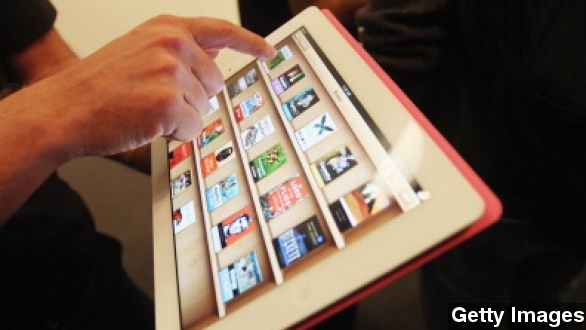 By Jay Strubberg
July 16, 2014
The company said it would distribute the funds only if its appeal of a Department of Justice lawsuit isn't successful.
SHOW TRANSCRIPT

Apple has agreed to shell out $400 million to consumers in 33 U.S. states over an e-book price-fixing lawsuit. But the tech giant says it will only do so if it's not able to successfully appeal an antitrust ruling. (Via Getty Images)

Last year, the Department of Justice won a suit claiming Apple colluded with five major e-book publishers to hike up prices over the standard $9.99 Amazon had set for new titles. Apple, of course, appealed. (Via Apple)

Still, the appeal is kind of a long shot for the company, since the appeals court would have to all-out reverse the lower court's decision.

Plus, the five publishers — who were named in the same lawsuit — all settled before the original trial.

New York Attorney General Eric Schneiderman, who's had a close-eye on the case said, "This settlement proves that even the biggest, most powerful companies in the world must play by the same rules as everyone else." (Via Getty Images)

"Apple did not conspire to fix ebook pricing, and we will continue to fight those allegations on appeal. We did nothing wrong. ... If we are vindicated by the appeals court, no settlement will be paid." (Via Tech Crunch)

It's clear why Apple would want an edge in the e-book marketplace — Amazon's "Kindle" has dominated the industry since its inception.

According to Digital Book World, Amazon boasts 67 percent of the total e-book market.

A tech writer for The New York Times says the publishing industry used to view Amazon as a "cute toy," but that's all changed since Borders shut its doors for good and Barnes & Noble looks like it's hanging on by a thread.

Not to mention the once-crowded e-book market is seeing companies slowly drop out of the game.

Barnes & Noble recently reduced funding for its Nook e-reader by three quarters after losing "billion of dollars in digital investment" — essentially raising the white flag. (Via The Digital Reader)

And Sony got out of the North American business in March and dished all its business to Canada-based eReader company Kobo — which reportedly doesn't have much interest in growing its U.S. market share. (Via The Digital Reader, GigaOM)

Apple's settlement agreement still needs to be approved by a New York district court and the exact dollar amount depends on the verdict of its current appeal.