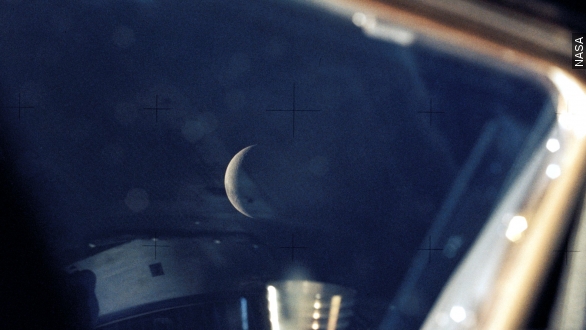 “Houston, we’ve had a problem.”

Apollo 13 would have been the third mission to send humans to the surface of the moon, but it never made it that far.

200,000 miles from earth, during its approach to the moon, an oxygen tank aboard the spacecraft’s service module exploded. This represented two immediate problems: a loss of breathable air, and external venting that threatened to literally push the mission off course.

“You say to yourself: ‘why did this happen on Apollo 12, or wait for Apollo 14?’ We didn’t know what caused the explosion at first, but the first thing we thought of: ‘perhaps a meteorite hit the lunar module,’” Lovell said at a Smithsonian National Air and Space Museum panel in 2010.

Within minutes of the explosion, focus had shifted from getting to the moon to getting safely back to earth.

Despite the lost oxygen tank, the crew had plenty of breathable air left. The issue was removal of carbon dioxide. The chemical scrubbers in the lunar module were designed to support two men for two days; survival of the crew required they support three men for four days while they returned to earth.

And since the air systems in the lunar module were designed differently than those in the command module, it meant literally fitting square pegs in a round hole.

“On the ground, an adapter was fashioned from materials the crew had available in the LEM: cardboard from a checklist, plastic bags and tape.”

It’s the quick thinking like this that gave Apollo 13 its reputation as such a successful learning experience for NASA.

Francis French, of the San Diego Air and Space Museum, spoke to NPR:

“They were ready to think about things that were way outside of their procedures they practiced, to run through checklists, to use their imagination and come up with ways to very calmly work out the best way to bring three people back to Earth alive.”

Jim Lovell says despite its aborted status, the mission still inspired a generation.

“I meet people now in their 50s, even some early 60s, that said “when I was a small kid, I watched you go up into space and this was the reason why I’m now an engineer, or scientist,’” he said. (Video via KMFB)

And while the astronauts aboard Apollo 13 never did set foot on the moon, they set a record of another kind during their slingshot around its dark side: to date, they have gone further from earth than any other human.