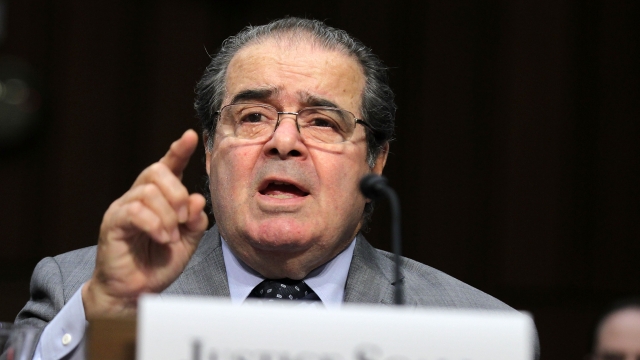 Sen. Ted Cruz attended the funeral, even as voting was underway in the South Carolina primary. He was the only presidential candidate to make it.

Justice Clarence Thomas read a passage from the Bible at the service, and Rev. Paul Scalia, one of Scalia's nine children, delivered a sermon during the service.

The remaining Supreme Court justices, Vice President Joe Biden and his wife, Jill, as well as hundreds of others filled the Basilica of the National Shrine of the Immaculate Conception.

"Dad understood the deeper he went in his Catholic faith, the better person and public servant he became," Paul Scalia said.

Instead of attending the funeral, the Obamas paid tribute to Scalia when his body lay in repose at the Supreme Court.

The president was criticized for not attending the funeral, but White House Press Secretary Josh Earnest said many factors went into the decision — including Obama's large security footprint.

This video includes a clip from The White House and an image from Getty Images.