When Trump Said He Wanted A Wall, This Isn't What He Meant 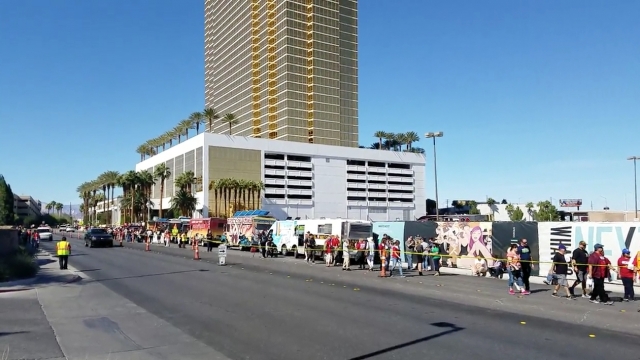 A union that has spoken out against Trump built a wall of its own Wednesday — not on the U.S.-Mexico border, but around Trump's Las Vegas hotel.

Oh, and it's made of taco trucks.

SEE MORE: #GOPHandsOffMe Protesters Get Explicit To Make A Point

The Culinary Union constructed the wall just in time for the final debate between Trump and Hillary Clinton. The debate is being held a few miles away at University of Nevada Las Vegas.

Most of the Culinary Union workers are immigrants. Other groups joined in, including those protesting the failure of Trump's hotel to negotiate with its union workers.

One of the organizers told Buzzfeed the goal was to remind Trump that "immigrant workers ... will be watching the debate and voting in November."

But why use taco trucks? Let's rewind to a comment from a member of Trump's Hispanic advisory board following Trump's controversial immigration speech last month.

"My culture is a very dominant culture, and it's imposing and it's causing problems. If you don't do something about it you're going to have taco trucks on every corner," Latinos for Trump co-founder Marco Gutierrez told MSNBC in September.

The campaign is taking the protest well. Trump's Hispanic outreach director told Buzzfeed she never turns down a chance for a good taco.

For the record, some ice cream trucks and other food trucks joined the protest, too.