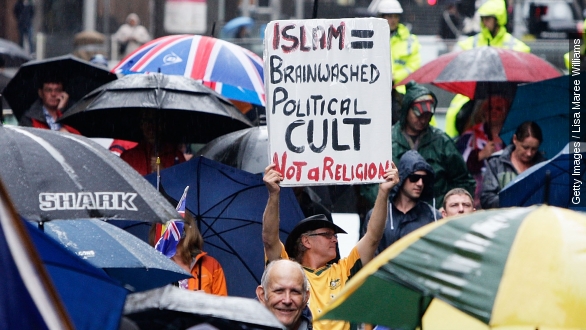 The anti-Islam Reclaim Australia group organized demonstrations in 16 cities throughout the country. The group says it is protesting against "sharia law and Islamization."

Counter-demonstrators also took to the streets to protest against the group. The organizer of those protests called Reclaim Australia's message racist.

"People have a right to freedom of speech but people need to be accountable to what they say and if they are spreading hate speech and lies about religious or ethnic minorities than they need to be held accountable for that," Mel Gregson said.

Police tried to keep the demonstrations separate but were unable to keep the two groups from clashing. At least four people were treated for injuries and three were arrested following the protests.

Tensions towards Australia's Muslim community have been rising since a Muslim man, claiming to support the terror group ISIS, killed three people and took several others hostage in a Sydney cafe in December.

Many have also accused Australian Prime Minister Tony Abbott of fueling resentment towards the Islamic community with comments like this one.

"I have often heard western leaders describe Islam as a religion of peace. I wish more Muslim leaders would say that more often and mean it," Abbott said.

Saturday's protests continued following the outbursts of violence with a heavy police presence.