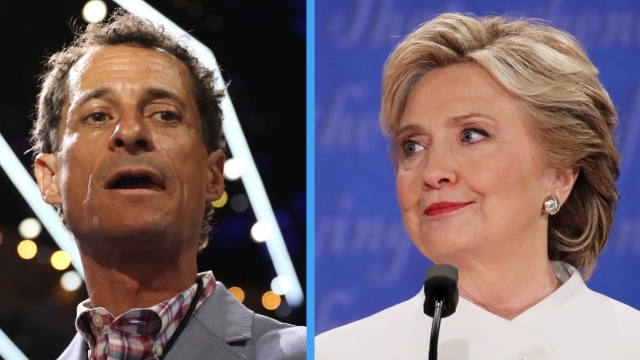 Former New York Rep. Anthony Weiner is apparently still giving the Clinton campaign headaches. The FBI is assessing whether emails reportedly recovered from a device used by Weiner are relevant to its previous investigation into Hillary Clinton's private email server.

Weiner is married to Clinton's top aide, Huma Abedin, who announced her separation from Weiner in August.

The new emails were discovered during the agency's probe into Weiner's alleged sexting with an underage girl.

The Department of Justice didn't charge Clinton over her use of a private server. FBI Director James Comey announced in July that he was not recommending criminal prosecution.

But in a letter to the chairmen of several congressional committees Friday, Comey told members he was briefed on the new emails Thursday and decided to "assess their importance to our investigation."

Comey wrote that the FBI "cannot yet assess whether or not this material may be significant." He also said he "cannot predict how long it will take" to complete the review of the emails.

Various outlets citing unnamed sources have reported the newly discovered emails came from a device that the FBI didn't previously have. NBC reported there isn't evidence that Clinton or her team withheld the emails.

In a statement Friday, Clinton called on the FBI to release more information on the investigation and called into question the timing of the letter's release.

"It is incumbent upon the FBI to tell us what they're talking about, Jeff. Because right noqw, your guess is as good as mine and I don't think that's good enough," Clinton said while responding to a reporter's question Friday night.

Clinton's opponent, Donald Trump, said in a statement that he welcomed the FBI's decision to "right the horrible mistake that they made."