Back At It? Anthony Weiner Finds Himself In Another Sexting Scandal 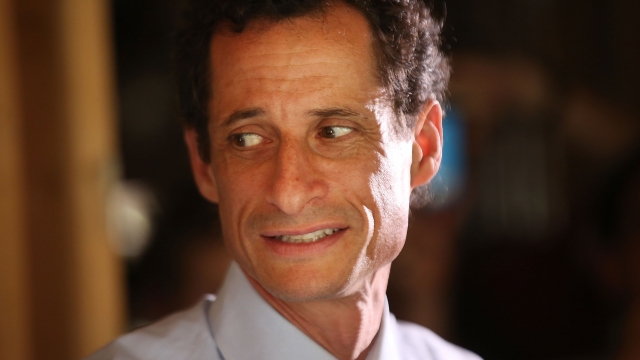 SMS
Back At It? Anthony Weiner Finds Himself In Another Sexting Scandal
By Lauren Stephenson
By Lauren Stephenson
August 29, 2016
The New York Post published lewd photos the former congressman reportedly sent to a woman who is not his wife. One photo shows his son next to him.
SHOW TRANSCRIPT

"I'm here today to again apologize for the personal mistakes I have made and the embarrassment I have caused," Rep. Anthony Weiner said. "Today I'm announcing my resignation from Congress."

"Yeah! Bye-bye, pervert," someone in the audience yelled.

It's been just over five years since former New York Congressman Anthony Weiner resigned from office after he accidentally tweeted an inappropriate photo of himself and lied about it before coming clean.

Now, it appears Weiner has found himself in another photo scandal involving a woman who is not his wife. Sunday night, the New York Post published pictures it says Weiner sent to the woman. One of the photos — a torso-down shot of Weiner wearing white briefs — reportedly shows his 4-year-old son lying next to him in bed wrapped in a blanket.

Weiner and the woman reportedly exchanged direct messages on Twitter for more than a year. At one point, Weiner apparently worried he publicly tweeted a photo of his crotch — the mistake he made in 2011.

The 51-year-old is married to Hillary Clinton's top aide, Huma Abedin. Abedin stood by Weiner's side through a second photo scandal in 2013.

But it appears Abedin isn't standing by his side any longer. She announced Monday that she is separating from Weiner. She said in a statement, "Anthony and I remain devoted to doing what is best for our son, who is the light of our life."

It remains to be seen how much — if any — attention it will take away from Clinton's campaign. But her opponent's campaign has been dealing with a scandal of its own in recent days.

News broke that Stephen K. Bannon had been charged in a domestic violence case 20 years ago, though the case was later dismissed. He later faced claims of anti-Semitism, which he denies.

The news cycle appears to be moving on from that story. And only time will tell how long the Weiner story will dominate headlines — especially since he's not a member of the campaign.

For his part, Weiner confirmed to the Post that he and the woman knew each other. He wouldn't comment, other than to say the conversations were "private" but "always appropriate."