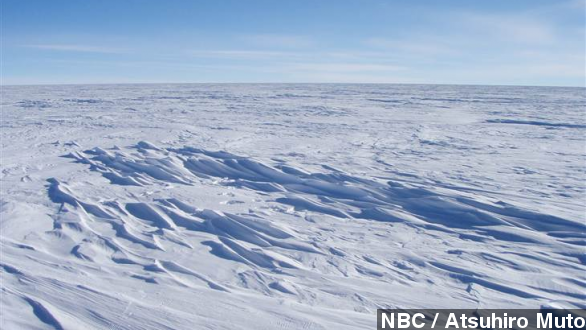 ​Data from a NASA satellite reveals there were temperatures recorded in east Antarctica that hit 135.8 degrees Fahrenheit below zero! Scientists say that's so cold it would actually hurt to breathe. (Via BBC)

And yes, thankfully, scientists say that is by far the coldest place on Earth. However, the new record won't be making its way into the Guinness Book of World Records.

That's because the temperature was recorded by satellite. In order for the temperature to be official for Guinness, it would have to be recorded at ground level using a thermometer. (Via NASA)

A scientist for the National Snow and Ice Data Center says: "Thank God, I don't know how exactly it feels. ... It's more like you'd see on Mars on a nice summer day." (Via Al Jazeera)

The news comes as winter storms sweep across the U.S., setting regional record-low temperatures of their own — but obviously nothing compared to the record set in Antarctica. (Via NBC)

So when you step outside this morning and complain about the cold, remember: It could be worse — a lot worse.