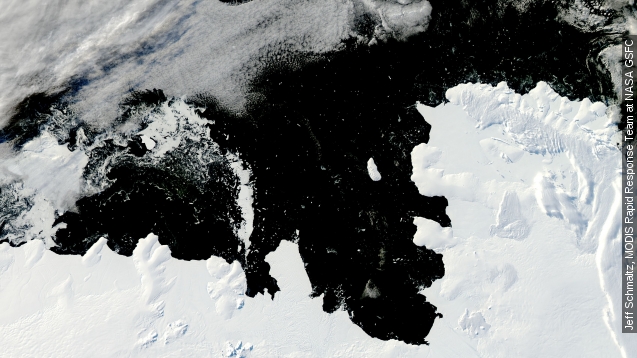 SMS
Antarctica Risks A Long, Slow, Fossil-Fueled Death
By Evan Thomas
By Evan Thomas
September 12, 2015
A new study does the worst-case math on fossil fuels and climate change. Antarctica could die a long, slow death if we burned everything we could.
SHOW TRANSCRIPT

A new report in Science Advances has done the literal worst-case math for fossil fuels and the climate. As you might expect, it’s not good news for our sea levels.

Researchers say if the world goes through all its attainable fossil fuel — coal, oil, natural gas — oceans would rise by 164 feet. Antarctica would melt completely.

Burning all our fossil fuel would take some 500 years at current rates, according to the researchers' estimates.

But the model suggests it would kick off an irreversible melt over millennia. In 10,000 years, Antarctica’s ice could be gone, and large portions of currently inhabited landmasses would be underwater. (Video via NASA)

The paper doesn't address all the catastrophic social consequences of running out of fuel. Rising sea levels might be the least of our concerns.

But that’s not the point. This, like many other recent studies, suggests if we don’t act in the near-term to curtail the effects of fossil fuel emissions, it won’t matter how much we regret it later. (Video via NASA)

One problem, as a writer at The New Yorker notes, is "as a society, we seem to have trouble planning more than a year or two in advance."

And we're already seeing permanent effects: CO2 is already thought to be causing irreversible damage to the oceans. (Video via Newsy)

The rate of West Antarctic ice loss has increased by more than 30 percent in recent years.

And researchers at NASA with access to 19 years of satellite data say we’ve already "passed the point of no return:" Glaciers in the West Antarctic Ice Sheet are on track to disappear within a few hundred years. (Video via NASA)

This most recent study holds up what is now probably a familiar number: 2 degrees Celsius. Its math shows if we cut down carbon emissions to keep warming at or below that threshold, we could dodge an Antarctica-shaped bullet 10,000 years from now.