Antarctic Ice Is Melting Faster Than Ever 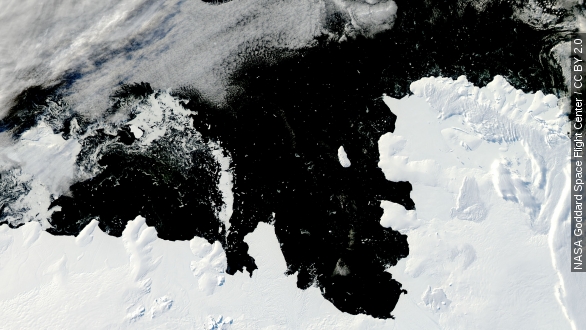 Antarctica is melting faster than ever.

This from a study by the California-based Scripps Institute of Oceanography, which found the floating ice shelves that make up large portions of the Antarctic coastline could lose half their volume in the next 200 years.

Researchers compiled 18 years of satellite data from three different European Space Agency missions, making this one of the most comprehensive looks yet at Antarctica’s thinning ice.

The study shows over the first nine years, Antarctica’s ice shelves saw an average of 5.99 cubic miles of loss a year. In the second nine; 74.3 cubic miles a year: a rate of loss more than 12 times faster than before.

Glaciers typically replenish mass lost to melting with snow that falls inland and is eventually compressed into new ice. But these days the melting is outpacing the new snowfall, indicating something is out of balance. (Video via National Geographic)

Since the shelves are already floating, they wouldn’t contribute to increased sea levels. But these shelves act like giant bookends for some of Antarctica’s largest glaciers. And if those melt, we’d notice. (Video via NASA)

“Some of those ice shelves are holding back, say, between 1m to 3m of sea level rise in the grounded ice. And that means that ultimately that ice will be delivered into the oceans,” co-author Helen Amanda Fricker told the BBC.

The news is not much better for Antarctic ice anywhere else. Earlier this month new research showed warmer water is pushing its way under the eastern Antarctic coast and thinning out glaciers there. (Video via ABC Australia)

And last year NASA researchers found a similar scenario has sent glaciers on the western coast into what they characterize as an “unstoppable” decline.

The Scripps team has published its most recent findings in the journal Science.

This video includes images from NASA and Davepape and music by Lee Rosevere / CC BY NC 4.0.