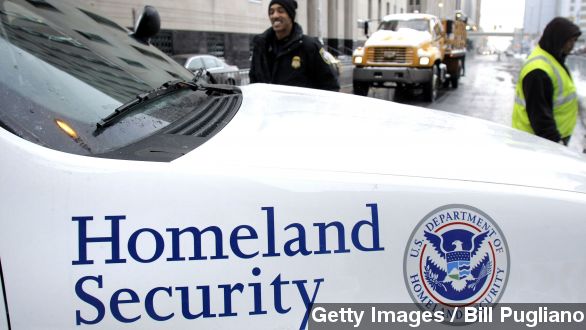 Just when the last one was beginning to feel like a distant memory ...

"The clock is ticking as we get closer to a potential shutdown." (Video via MSNBC)

This time around, the holdup involves funding the U.S. Department of Homeland Security.

In case you haven’t been following this latest round of political theater, this is how we got here.

Inside the agency's annual funding bill, Republicans have tucked measures that would defund President Obama’s immigration executive orders. And that, of course, is a nonstarter for Democrats.

The problem is, Congress needs to pass some version of this bill by February 27 to keep the Department of Homeland Security funded. If they don't act in the next two weeks, lawmakers — mostly Democrats — are issuing some pretty dire warnings of what might happen.

But in reality, the effect on national security would be minimal — at least according to this 2013 report from the agency, which spells out contingency plans in the event of a funding hiatus.

All workers deemed "essential" would show up for work. Eighty-five percent of the agency’s workers fall under this category. (Video via Transportation Security Administration)

They include the Coast Guard, the Secret Service, immigration agents and TSA screeners.

Many of these workers would go without paychecks for as long as the shutdown lasts.

They'd eventually receive retroactive pay, but that requires Congress to get its act together and fund the department. (Video via The White House)

There is a bit of irony in all of this. Work would still go on in the very office Republicans want to hamstring. Those responsible for carrying out President Obama's immigration policies would stay on the job in the event of a shutdown. That's because their salaries aren't funded by money allocated by Congress.