Another FSU Football Player Accused Of Hitting A Woman 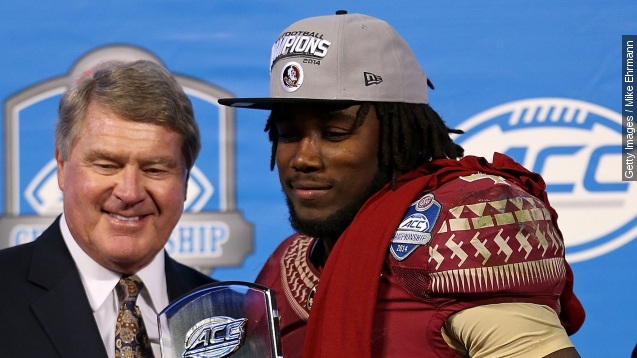 SMS
Another FSU Football Player Accused Of Hitting A Woman
By Christian Bryant
By Christian Bryant
July 10, 2015
FSU running back Dalvin Cook has been charged with battery for allegedly hitting a woman. This is the second incident of its kind within a month.
SHOW TRANSCRIPT

The Florida State Attorney's Office in Tallahassee levied battery charges against Florida State University running back Dalvin Cook Friday after a woman accused him of repeatedly punching her in the face.

"A gentleman other than Cook approached her, asked her for her phone number. She told him she wasn't interested. ... He came back with Dalvin Cook, according to this woman. ... The argument became heated and she said Dalvin Cook punched her in the face several times," ESPN reporter Mark Schlabach said.

Cook is a 19-year-old sophomore from Miami.

Fisher spoke on the recent events involving Johnson and Cook in a statement, saying, "The majority of our players are exemplary, but clearly we must place an even stronger emphasis on this, and I personally promise we will. ... We will do better. I will not tolerate anything less."