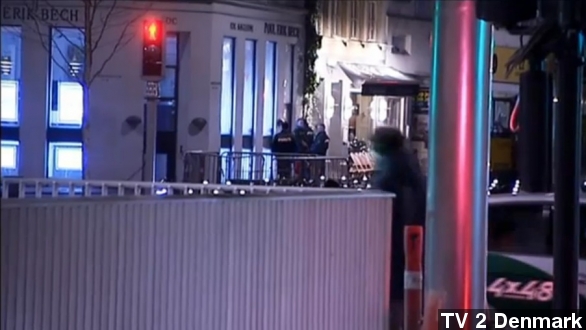 By Matt Picht
February 14, 2015
One person was killed and two people were injured in a shooting at a Copenhagen synagogue 10 hours after another shooting in the city.
SHOW TRANSCRIPT

Two people are injured and another dead after a shooting at a synagogue in Copenhagen. This comes hours after another gun attack in the city left one person dead.

Danish police say one person was shot in the head and later died; two officers were also wounded in the shooting. The suspect fled the scene on foot, and authorities have evacuated the area to search for the gunman.

This shooting comes 10 hours after another shooting in the city left three people injured and one dead. The gunman from that incident has not been apprehended, but police caution it's too early to say if the attacks are linked in any way.

The earlier shooting took place at a cafe hosting a freedom of speech debate, which was attended by controversial Swedish cartoonist Lars Vilks and the French ambassador, both of whom survived the attack unharmed.