Anne Hathaway Is Reportedly Particular About Her Breakfast 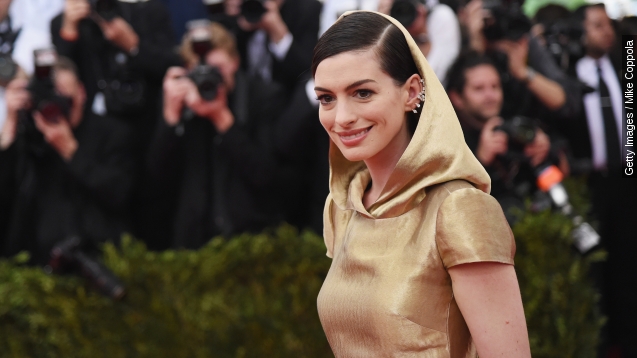 "Do you think she can do this?" a character says in a trailer for "The Princess Diaries."

That's according to TMZ, which reports the actress sent her morning meal back four times while shooting a commercial in Los Angeles earlier this month. (Video via NBC / "The Tonight Show")

TMZ didn't name its source, but supposedly Hathaway first sent her meal back because the "poached egg [was] too runny." The second time was because her "English muffin was cold." The third time, her egg was too cold, and finally, the fourth was because she wanted her eggs fried, not poached.

Now, many outlets are picking up this report, despite nothing has been confirmed — and this is TMZ.

But it really just seems to be more fuel for the fire for those who dislike Hathaway — a sentiment that gained popularity after some said the star seemed smug and insincere while accepting several awards for her role as Fantine in "Les Miserables."

In 2014, Hathaway told Ellen DeGeneres the negative comments used to get to her.

"If you don't love yourself when someone else says horrible things to you, a part is always gonna believe them. ... I don't want to feel like I'm fragile every time I leave the house because I'm so dependent on what other people think of me. So, I just took a step back," Hathaway said.

One person who has been singing Hathaway's praises lately is her "The Devil Wears Prada" co-star Emily Blunt.

She told Sirius XM's Entertainment Weekly Radio that it was often difficult to say her biting lines to Hathaway while filming the 2006 movie because Hathaway was so kind on set.

Kind to everyone except her breakfast chef, apparently.