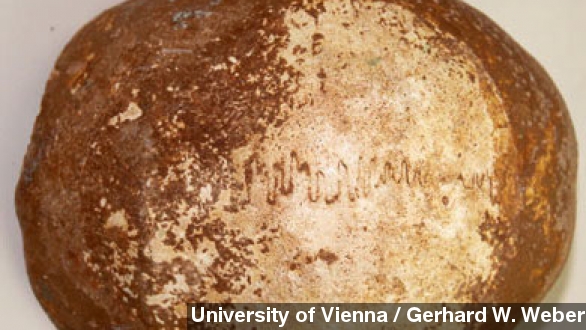 Scientists are getting closer to finding the time and place where modern humans and Neanderthals first — got it on.

A new study in the journal Nature may have pinpointed one of the first places our two species bumped into each other: the town of Manot in northern modern-day Israel. (Video via Google)

It's there that scientists found a skull fragment from a 55,000-year-old human, and finding a human skull in that place at that time told them a lot about how our ancestors migrated and, maybe, first met the Neanderthals.

Research has already given us a few things that back this story up: Neanderthals were known to live in the area at the time. Humans are thought to have left Africa around 60,000 years ago by way of the Middle East, and we know the two groups met at some point and interbred. (Video via BBC)

Chris Stringer of London's Natural History Museum explains, "There seems to have been an overlap between those modern humans who came out of Africa with the Neanderthals. That overlap might have been 10-, 20-, 30,000 years."

Modern humans, particularly Europeans, have genetic markers linking them to Neanderthals. Commercial testing can even tell you what percentage of your DNA is Neanderthal.

A study last fall looked at the DNA of an ancient leg bone and calculated that the first interbreeding took place between 50,000 and 60,000 years ago. The new skull fragment is right in the middle.

So we already had clues to the time, but what the study's lead author says is most exciting about the skull is the place:

"This is the first evidence that shows that, indeed, there was a large wave of African migrants coming out of East Africa ... and inhabiting the Eastern Mediterranean region roughly 55,000 years ago."

So, altogether, the skull could represent the first modern humans to leave Africa, the first to encounter Neanderthals and the first group that went on to colonize Europe. That's a lot of firsts for one fossil.

This video includes an image from Wapondaponda / CC BY SA 3.0.