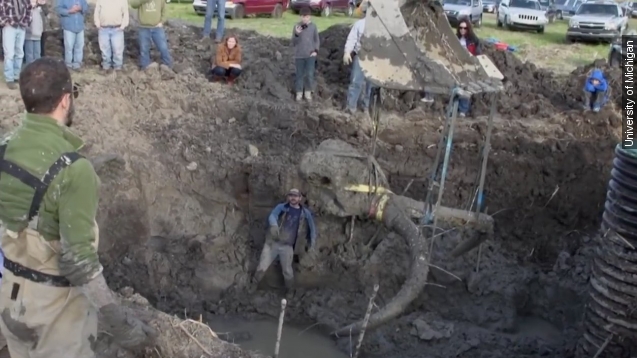 SMS
Ancient Mammoth Skeleton Found On Michigan Farm
By Ryan Biek
By Ryan Biek
October 4, 2015
An ancient mammoth's bones were discovered on a Michigan farm. Researchers said the find may reveal that humans arrived there earlier than we thought.
SHOW TRANSCRIPT

Roughly 20 percent of the animal's bones were uncovered along with what the researchers think is a stone tool. That and the way the bones were organized could be signs that humans butchered it.

Researchers believe ancient humans used large stones to anchor the meat in a pond where they could have retrieved it later.

Mammoths were elephant-like creatures that disappeared from North America almost 12,000 years ago. The bones from this recent find still need to be dated, but if they're confirmed as 15,000 years old, it could mean humans came to the area much earlier than we thought.