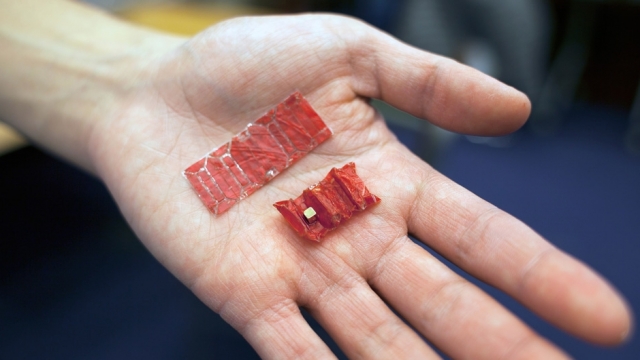 SMS
An Origami Robot Can Retrieve Things Kids Weren't Supposed To Swallow
By Ben Lawson
By Ben Lawson
May 13, 2016
This robot can be swallowed like a pill to remove harmful items, like batteries, from the body.
SHOW TRANSCRIPT

You might soon be able to swallow a tiny, folding robot to avoid certain invasive surgeries.

Researchers at the Massachusetts Institute of Technology say their origami robot can retrieve single-cell batteries, which kids often swallow, and can even patch up wounds.

Over 3,500 incidents of people swallowing button batteries are reported every year: Most of them are toddlers. When left in the body for too long, they can trigger a chemical reaction that can cause burns.

The origami bot's ability to move without a tether inside the body is what makes it perfect for this task. Right now, it's controlled with external magnetic fields.

The robot is folded up and frozen in ice so it can be swallowed. Once the ice melts, a magnet attached to the robot can connect to the battery inside a person's system and then remove it.

Next, the researchers want to add sensors that let the robot navigate on its own, without the external magnetic field.