An Orangutan Was Able To Learn, And Mimic, Human Speech 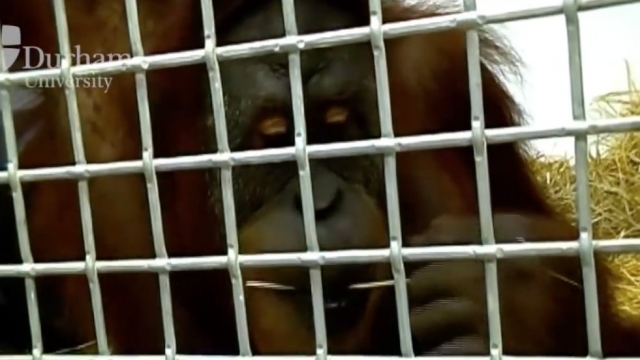 SMS
An Orangutan Was Able To Learn, And Mimic, Human Speech
By Ryan Biek
By Ryan Biek
July 28, 2016
An international team of researchers played a game of "do as I do" with an orangutan. Surprisingly, the animal was able to learn new sounds.
SHOW TRANSCRIPT

An orangutan was able to mimic human speech as it learned new sounds from an international team of scientists.

They may seem more like grunts, but the orangutan you heard is showing some key vocal skills. Rocky was able to control his tone and pitch to repeat the random vowel sounds made by the researchers.

Before this study, scientists believed great apes lacked the ability to control their voices. That meant they were limited to a few dozen preset sounds and couldn't learn to produce new ones — making it a mystery how human speech could have evolved.

But Rocky's sounds were cross-referenced against 12,000 hours of tapes from over 100 other orangutans, and the data showed they were different. Rocky was able to learn new sounds and control them in a "conversational" context.

SEE MORE: Monkeys Are Better At Math Than We Thought, Study Shows

That learning aspect is key, too, since all humans learn language after birth.

Speech is one of humanity's most valuable abilities, and this study shows the foundation for it may have already existed the last time humans and orangutans had a common ancestor — more than 11 million years ago.