An Illegal Play Or Part Of The Game? 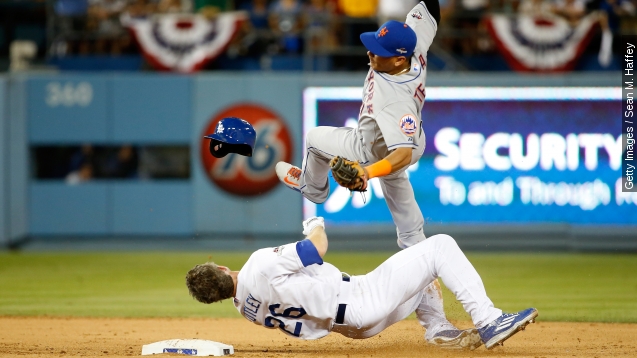 SMS
An Illegal Play Or Part Of The Game?
By Carter Woodiel
By Carter Woodiel
October 11, 2015
A hard slide from a Dodgers base runner broke the leg of the New York Mets' shortstop, and the teams disagree if the play crossed the line.
SHOW TRANSCRIPT

The New York Mets have lost their shortstop. The Dodgers' Chase Utley slid hard into Ruben Tejada, breaking the infielder's leg during Saturday's National League Division Series game. And the two teams seem to disagree on whether or not the play was dirty.

"I think every player in the world would have done the same thing that Chase did there," Dodgers first baseman Adrian Gonzalez said.

"My experience is that's not a slide; that's a tackle," Mets outfielder Michael Cuddyer said.

Sliding hard into second to break up a double play happens all the time in baseball; the question here is whether Utley, who said he never tried to hurt Tejada, went too far. (Video via PETA)

Those who say he did point to rule 7.09 of MLB's rulebook, which states, in part, a runner "willfully and deliberately" trying to break up a double play should be called out — along with the runner headed for first.

Utley admits he was trying to break up a twin killing, so he might have been in violation of the rule, but his left hand was near the bag. And just because an MLB rule is on the books doesn't mean it's enforced to the letter.

For example, Rule 8.04 mandates the pitcher take no more than 12 seconds to pitch when the bases are empty — but when was the last time you saw an ump call a pitcher out for taking too long?

That’s why some players and fans are pushing for a new rule, and they’re backed by a bit of precedent. Before the 2014 season, MLB created a rule aiming to prevent hard collisions at home plate.

The rule came three years after star Giants catcher Buster Posey was severely injured following one of those collisions, leading some writers to dub it "The Buster Posey Rule." (Video via Under Armour)

Padres All-Star outfielder Justin Upton said on Twitter Saturday night Tejada deserves the same treatment, asserting a ‘Tulo Rule’ would soon be in place if star shortstop Troy Tulowitzki had been in Tejada’s cleats. (Video via Beats by Dre)

MLB is reviewing Utley's action. Joe Torre, who serves as the league's chief baseball officer, says he's in charge of looking into the slide, which he acknowledges was "a little late."

Utley was called safe on the play, and went on to score the second of four runs for LA in the seventh. The Dodgers won the game 5-2, tying up the NLDS at a game apiece.