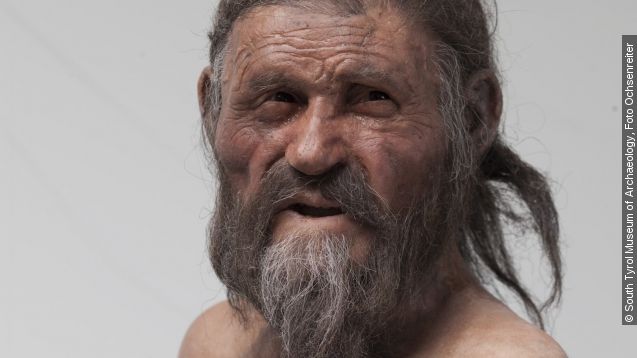 SMS
An Iceman's Upset Stomach Can Teach Us About The Earliest Europeans
By Steven Sparkman
By Steven Sparkman
January 7, 2016
Otzi the iceman has been studied for more than two decades, but researchers are still finding new ways to unlock his ancient secrets.
SHOW TRANSCRIPT

Otzi the iceman, a 5,300-year-old man found preserved in an Italian glacier, has helped scientists learn about ancient Europeans for more than 20 years.

But using techniques that sound like aha moments on "CSI" — except they're real — researchers are still finding clever ways to discover Otzi's secrets.

The latest findings, published in the journal Science, come from examining the iceman's stomach.

That's not a new idea. Researchers already know what Otzi's last meals were, and they've been able to trace his movements before his death based on what he was digesting.

But researchers from the European Academy went further, tracking down the DNA of a bacteria in Otzi's stomach called Helicobacter pylori. About half of all modern humans have it. (Video via Sycuro et al. / CC BY 2.5)

"We know from previous studies that this bacteria is probably present since the onset of mankind," said researcher Albert Zink.

Europeans have a mixed strain of the bacteria, but the iceman's more closely resembled the Asian version. Assuming Otzi wasn't one of the world's earliest globetrotters, that information will help scientists piece together the migration of humans into Europe.

Otzi may also have had an upset stomach when he died, but that's not what killed him. Earlier research found an arrow to the back and a sharp blow to the head, showing he likely died in a fight.