An Honest Conversation About Superdelegates And Bernie Sanders 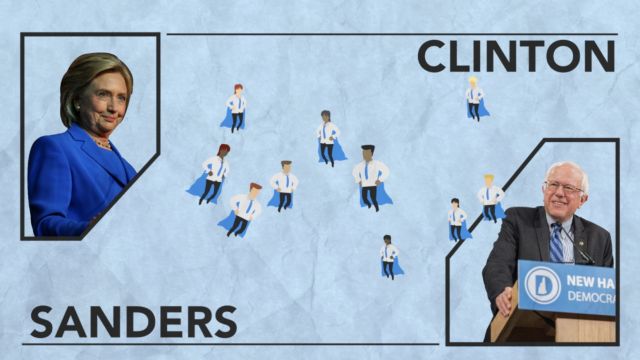 Newsy's Zach Toombs and Kate Grumke discuss the downsides to putting too much weight in superdelegate counts in the Democratic primary.

Toombs: So we're talking about superdelegates and specifically how they're counted between Clinton and Sanders. And this really matters because it can persuade or dissuade a candidate's supporters from actually coming out and voting for them on primary day.

Toombs: Kind of a fair complaint. Sanders has won about 40 percent of the primary contests so far. He’s won eight out of 20 states. And yet, when you look at the delegate count from most outlets’ delegate counters, you see a huge gap. Much more than that 60 to 40 percent breakdown would suggest.

"He has to win 55 percent of all of the remaining delegates to overcome her built in lead with these superdelegates," Andrea Mitchell said on MSNBC.

Toombs: Superdelegates are by their nature unpledged, and they can and have in the past changed their minds.

Grumke: Yeah, so if you look at 2008 with Barack Obama and Hillary Clinton, Clinton started that race with way more delegates than Obama. Not as many as she has compared to Sanders now. But in the end they ended up switching to Obama, he actually passed her in about May and she dropped out in June.

Toombs: And when it comes to how media outlets are counting delegates and superdelegates, you pointed out something interesting with The New York Times.

Grumke: Yeah, so The New York Times has a tracker of how many delegates everyone has and there's a calendar of the primaries. And a couple days ago their tracker was including superdelegates for Clinton and Sanders. And then I checked today and they're only including committed delegates.

Toombs: Superdelegates are very important to the Democratic nomination process. I mean, this is the establishment, for lack of a better term, of the Democratic party, who hold a huge influence on who the candidate will be and as long as media outlets are counting it this way they hold a huge influence over how the entire nation and the world is perceiving the race and how close it is.

This video includes Getty Images, clips from MSNBC and CNN and music from Kevin MacLeod / CC BY 3.0.