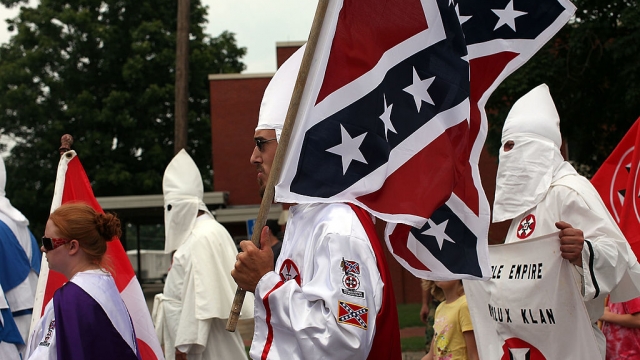 SMS
An Error Gives The KKK A Shot At Adopting Its Own Highway
By Grant Suneson
By Grant Suneson
July 5, 2016
The KKK's lawsuit against Georgia can go to trial. The state Supreme Court says a judge should decide whether the group can adopt a highway.
SHOW TRANSCRIPT

The Ku Klux Klan could soon be getting its own highway sign paid for by the government — and it's all thanks to a clerical error.

The KKK won a big legal battle Tuesday when the Supreme Court of Georgia ruled its lawsuit against the state can go to trial.

You've probably seen those Adopt-a-Highway signs, where a group cleans a stretch of roadway in exchange for a sign on both sides of the highway. In 2012, the Georgia Department of Transportation denied the white supremacist group's request to sponsor a stretch of road near the North Carolina border.

That request was shut down because the state feared the KKK’s "long-rooted history of civil disturbance would cause a significant public concern." But the Klan, and its unlikely allies at the American Civil Liberties Union, filed a lawsuit saying that's a violation of free speech.

The Georgia DOT tried to block the suit, but the state Supreme Court ruled in favor of the KKK — not necessarily because the court bought the Klan's argument, but because the state’s paperwork wasn't filed correctly.

So now the KKK will get to argue that it has a right to have its name displayed on the road just like any other group.