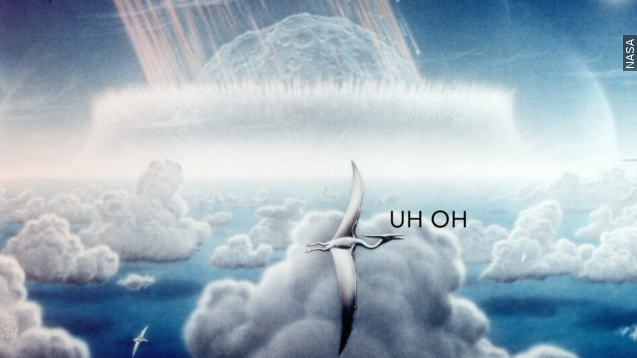 It wasn't just a space rock: More evidence now supports the theory that Earth suffered not one but two simultaneous extinction events at the end of the Cretaceous period.

The asteroid impact linked to the Cretaceous extinction also accelerated volcanic activity in a region of India known as the Deccan Traps.

New research from a team at UC Berkeley shows these two events took place one after the other, at least on a geological timescale.

Lead researcher Paul Renne says, "It becomes somewhat artificial to distinguish between them as killing mechanisms: Both phenomena were clearly at work at the same time."

Think of Earth as a toothpaste tube, but the toothpaste is lava. If you poke the tube — that is, Earth's crust — with enough force, it's going to leak.

If you poke it with an asteroid, it's going to start leaking twice as fast as it was before. The researchers say the Deccan Traps doubled their lava output after the impact on the other side of the world. (Video via Smithsonian Channel)

That said, it took a while. "Initiation of this new regime occurred within ~50,000 years of the impact, which is consistent with transient effects of impact-induced seismic energy."

In other words, the planet's ecosystems had just started to get back on balance after the space rock landed on their heads when the planet started spewing dangerous amounts of lava. (Video via CBS)

The Berkeley research team has published its findings in the journal Science.

This video includes images from NASA and Kppethe / CC BY 3.0, and music "Does Not Compute" by Birocratic / CC BY 3.0.