An Arab NATO: Why The Arab League Wants A Joint Army 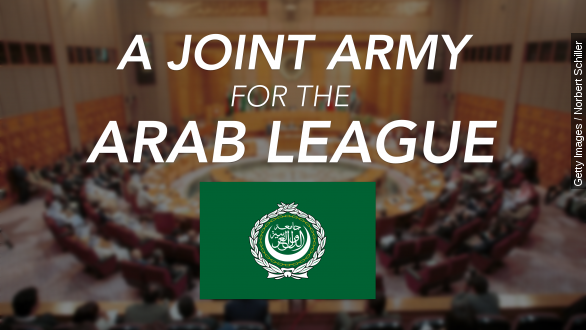 SMS
An Arab NATO: Why The Arab League Wants A Joint Army

By Jake Godin
March 28, 2015
The Middle East is one of the few regions in the world without a collective security alliance, but Egypt's president is pushing to change that.
SHOW TRANSCRIPT

The 26th annual Arab League summit has begun in Egypt, and one of the biggest issues on the table is a joint Arab military force. (Video via Al Saudiya)

Egyptian President Abdel Fattah el-Sissi called for the force Saturday as he addressed the other Arab League members.

A joint military force would theoretically serve as a way to counter instability within Arab states in the Middle East and North Africa — think Libya’s current crisis or extremists in Iraq and Syria. (Video via Libya Alhurra TV)

Currently, the Middle East remains one of the only major regions in the world without a collective security pact such as the North Atlantic Treaty Organization and the Union of South American Nations.

We don't know what nations would be involved or how large the military force would be, but a NATO-like army organization made up of Arab countries isn’t a new concept. And this may be the closest the 22-country Arab League has come to successfully creating one.

The last time a joint army was used by the Arab League was in 1948, three years after the League’s creation. The Arab Liberation Army was created with volunteers to fight on the Arab side of the 1948 Palestine war. After the war ended, the temporary army was disbanded.

Since then, only symbolic attempts at a collective security force have been made.

The United Arab Command was one such attempt. Proposed by Egypt in 1964 during the first Arab League summit, the organization became defunct only three years later during the Six-Day War. (Video via CIA)

Fast forward to the 21st century and you have a 2012 request by the Arab League to create a joint peacekeeping force in Syria with the United Nations — an idea that never came to fruition. (Video via SMART News Agency)

But just how effective would a force actually be in the Middle East today?

Consider combat operations performed by NATO. That joint military force has seen some success in the past, though it's been unable to solve conflicts in regions like Ukraine and the Caucasus.

And with the unfolding crisis in Yemen, a proposal for a joint military plan between Arab League members carries even more significance. Saudi Arabia, Egypt and eight other Sunni nations have formed a coalition to drive out the Shiite Houthi rebels. (Video via Al Arabiya)

If an Arab League military force were to become a reality, it's possible embattled leaders in the future could rely on fellow Arab nations for military intervention instead of the U.N.

This video includes images from The Palmach Archive / CC BY 3.0 and Alyssa Bernstein / CC BY NC 2.0 and music by Chris Zabriskie / CC BY 4.0.