An Afghanistan Hospital May Have Been Bombed By The US 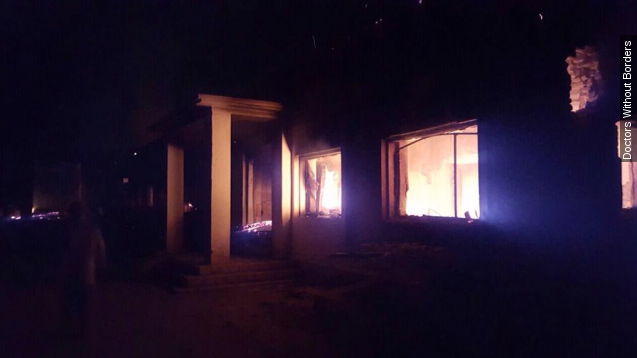 SMS
An Afghanistan Hospital May Have Been Bombed By The US
By Jake Godin
By Jake Godin
October 3, 2015
A U.S. military spokesman said airstrikes in the city of Kunduz might be responsible for the death of at least nine Doctors Without Borders staffers.
SHOW TRANSCRIPT

A Doctors Without Borders hospital in northern Afghanistan has been bombed.

The medical charity says its hospital in Kunduz came under sustained bombing Saturday morning. Both the Afghan and U.S. governments were told of the hospital's location well before the bombing. (Video via Channel 4)

According to MSF, 37 people were seriously injured, 19 of which were staff members. Twelve MSF staffers and seven patients were killed. However, the organization's statement also said many patients and staffers are still unaccounted for.

While the organization itself hasn't confirmed, The Guardian says an MSF doctor who wished to remain anonymous put the death toll at 20.

U.S. Secretary of Defense Ash Carter released a statement on the airstrike saying a full investigation is underway and that his thoughts and prayers were with everyone affected.

Kunduz has been contested by Taliban forces since they overran the provincial capital in late September.

The U.S. has been assisting Afghan security forces in retaking the city with airstrikes. The U.S. officially ended its war there at the end of 2014.

Hospitals run by Doctors Without Borders have often been targeted in conflict zones. (Video via Doctors WIthout Borders)

The group also said hospitals it supported in Iraq were targeted in July last year. A clinic it ran in Tikrit was shelled a month earlier. (Video via Doctors Without Borders)

This video includes images from Doctors Without Borders.