Amy Schumer Speaks Out In Response To Theater Shooting 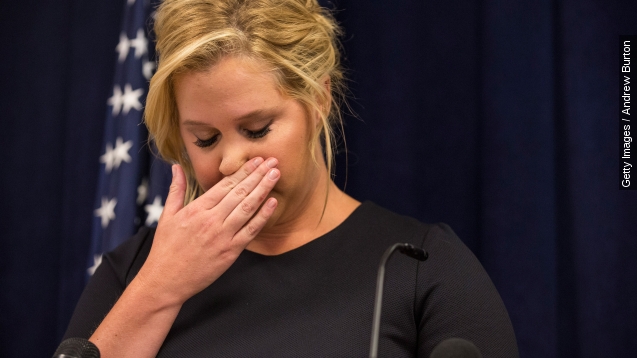 SMS
Amy Schumer Speaks Out In Response To Theater Shooting
By Grant Suneson
By Grant Suneson
August 4, 2015
Comedian Amy Schumer joined Senator Chuck Schumer to debut a plan to curb gun violence by restricting gun access for those with a violent past.
SHOW TRANSCRIPT

Amy Schumer was uncharacteristically somber Monday as she joined her cousin Chuck Schumer to speak out in favor of gun control.

CNN captured the actress and comedian getting choked up while talking about the victims of the Lafayette theater shooting. Attendees were watching her movie "Trainwreck" when a gunman opened fire at the theater, killing two and injuring nine others.

"I’m not sure why this man chose my movie to end these two beautiful lives and injure nine others, but it was very personal for me," Schumer said

The plan encourages states to contribute to the federal government's national background check system. States would be asked to share data on "felons, spousal abusers and the adjudicated mentally ill."

The plan would also survey each state to find the best standards for involuntary commitment of the mentally ill and fully fund mental health and substance abuse programs.

Amy echoed the senator's request for action and called for swift changes to the nation's gun availability regulations.

She made an appearance on "The Daily Show" Monday to explain how she got involved with the political effort.

"The second this happened, you know, you want to act. I wanted to go down there and do whatever I could," Schumer told Stewart on "The Daily Show."