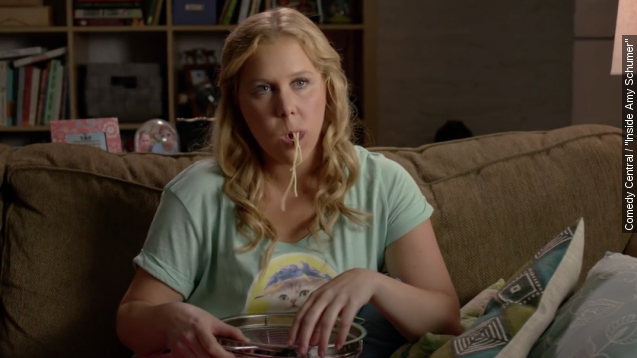 She made a name for herself being crass and crude — always unapologetically Amy.

But now, she's an Emmy-winning comedian, with a blockbuster under her belt and a new book deal valued over $8 million, which trumps the previous industry benchmark set by Tina Fey.

Schumer has transcended rising raunch-comic to thought-provoking intellectual. And though her smarts are delivered to us in satire via her sketch comedy show "Inside Amy Schumer," her message is as massive as the media's ridiculous obsession with women's backsides.

2015 seems to be the year of Amy Schumer. And though a reign in comedy could be shorter than Kevin Hart, it's given Amy a chance to stand up for what she believes in.

She's a feminist who's tired of inequality in the workplace and not afraid to expose herself to some locker room talk to highlight showbiz's double standards.

She's an advocate against sexual assault on college campuses.

When a gunman killed two people at a showing of her film "Trainwreck" in a Louisiana movie theater, she called for gun control legislation.

And when it comes to body image, Schumer is perfect at empowering imperfections.

"I'm not going to apologize for who I am. And I'm going to actually love the skin that I'm in and not be striving for some other version of myself," said Schumer at the 2015 Glamour Women of the Year Awards.

Sure, Schumer isn't the first comedian to shed light on social issues, but her approach to celebrity so early in her career is refreshing. And while twisted humor will still accompany her moment in the sun, we should remember those foul jokes are meant to make the world a little more fair.