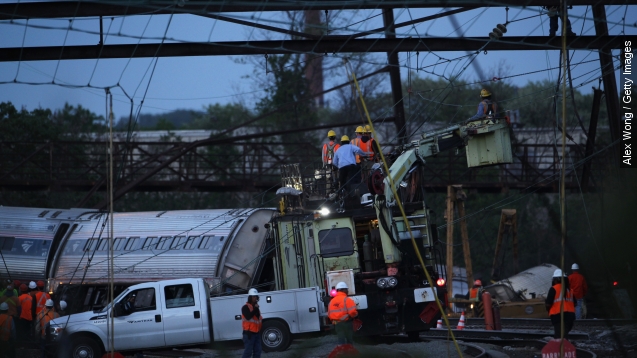 The stretch of track where an Amtrak train derailed Tuesday night, killing at least seven people, was missing a positive train control system that would've regulated its speed. (Video via National Transportation Safety Board)

"Based on what we know right now, we feel that had such a system been installed in this section of track, this accident would not have occurred," National Transportation Safety Board member Robert Sumwalt told reporters Wednesday.

It's a fact that has highlighted Amtrak's lagging infrastructure, a very visible reflection of the lack of investment the country's infrastructure as a whole has been quietly abiding for decades. (Video via CBS)

"Imagine whisking through towns at speeds over 100 mph, walking only a few steps to public transportation and ending up just blocks from your destination," President Obama said in 2009.

Months into his time in office, the president sounded ambitious about upgrading the country's train system to high-speed rail and laying out grants to bring the service to states across the country. (Video via The White House)

But in the intervening years, despite increasing Amtrak ridership, the Republican governors of states like Ohio, Wisconsin and Florida have rejected those grants.

On a federal level over that span, Amtrak funding has been on a downward trend, even as Amtrak ridership has consistently increased, with one blip in 2009, adding close to 10 million passengers since 2000.

That's a trend that looks to continue, with House Republicans striking down a move to increase Amtrak's funding next year, which exposes one of Amtrak's biggest stumbling blocks: politics. (Video via U.S. House of Representatives)

House Democrats proposed that move as well as another amendment that would support the broader implementation of the positive train control systems already mandated by Congress, which again, the NTSB said would've prevented Tuesday's derailment. (Video via Norfolk Southern Corporation)

"Even this afternoon as we learned that the train was likely way over the speed limit, according to the authorities, when it went off the rails, the political fingerpointing continued without pause," Megyn Kelly said on Fox News.

Megyn Kelly, in step with congressional Republicans, accused politicians, mostly Democrats, of using the tragedy for their own political interests. She seemed to imply the train's derailment didn't have to do with infrastructure and instead pointed the finger at the engineer.

The NTSB officials conducting the investigation said Wednesday they hadn't spoken to engineer Brandon Bostian. His lawyer said Thursday that Bostian has no recollection of the incident. (Video via National Transportation Safety Board, ABC)