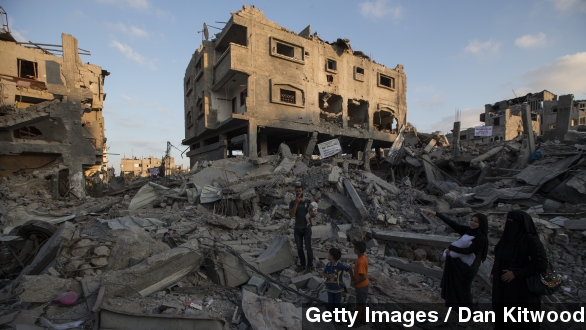 The nearly two-month conflict between Israel and Hamas killed more than 2,100 Palestinians and 72 Israelis. Most of the Palestinians were civilians while all but six Israelis were soldiers. (Video via Al Jazeera)

Israel quickly responded to — and largely dismissed — the report.

And the NGO Monitor — considered by many to be pro-Israel — published this article saying Amnesty "invented" the report and had "a lack of access to military intelligence and other vital decision-making information necessary to support its politicized allegations."

Throughout the conflict, Israel maintained it would not stop its military campaign until all tunnels leading from Gaza into Israel were destroyed. (Video via CNN)

It also argued Hamas essentially tried to use civilians as shields by placing rockets and their fighters in or near housing complexes, hospitals and schools. (Video via Israel Defense Forces)

Amnesty rejected that reasoning as justification for certain air strikes.

A director for the organization wrote, "Even if a fighter had been present in one of these residential homes, it would not absolve Israel of its obligation to take every feasible precaution to protect the lives of civilians caught up in the fighting."

Despite this summer's conflict coming to an end, tensions still remain in and around Jerusalem.

Israeli Prime Minister Benjamin Netanyahu recently announced plans for 1,000 Jewish-only housing units in east Jerusalem. The murder of a rabbi and activist led to the temporary closure of the holy site Temple Mount, where protesters again clashed with police Wednesday. Also Wednesday, a man rammed his car into a crowded train platform, killing at least one person and injuring several others — the second such attack in recent weeks. (Video via CBS, BBC)