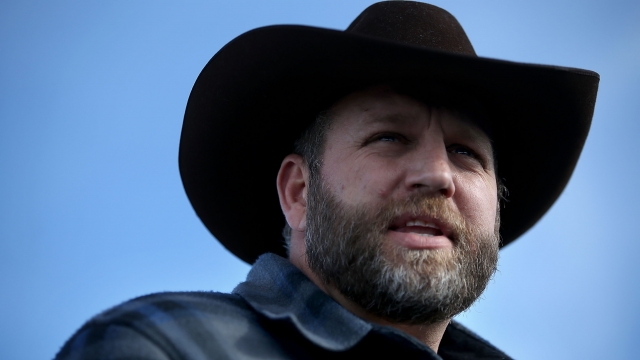 SMS
Ammon Bundy, Now In Custody, Tells Oregon Militia To Go Home
By Eugene Daniels
By Eugene Daniels
January 27, 2016
The militia leader is telling followers to go home after a man was killed in a shootout with police.
SHOW TRANSCRIPT

After a shootout with police left one man dead and seven people, Ammon Bundy, who was one of those arrested, is asking members of the Oregon militia that took over a federal building to go home.

In a statement, Bundy said: "To those at the refuge, I love you. Let us take this fight from here. Please stand down. Go home and hug your families." He also implored the government to let the militia go home "without being prosecuted."

Bundy's statement echoes what law enforcement has been saying since the group took over the building almost a month ago. "It's time for everybody in this illegal occupation to move on. There doesn't have to be bloodshed in our community," Sheriff David Ward said during a press conference.

But it doesn't look like the group plans on leaving anytime soon. According to the Los Angeles Times, one of the occupiers said in a live stream: "There are no laws in this United States now! This is a free-for-all Armageddon!" adding if "they stop you from getting here, kill them!"

Now law enforcement officials are responding more forcefully to the occupation than they have in the past. Authorities have blocked off roads leading up to the building, adding checkpoints and based off video from NBC, they don't seem to be letting anyone near the area. (Video via NBC)

Though the FBI hasn't released many details about how the shootout started, it did say law enforcement was trying to stop the group as they were headed to a community meeting and that at least one member of the militia shot at officers.