Amid Concerns, US Poised To Strike Cuba From Terrorism List 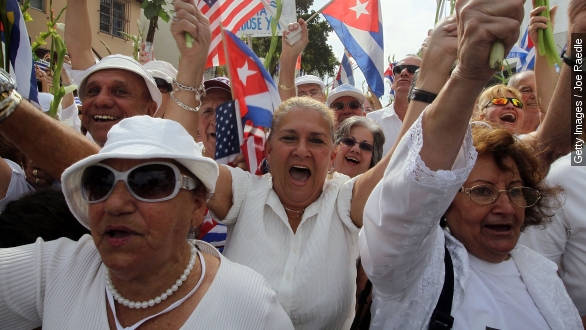 SMS
Amid Concerns, US Poised To Strike Cuba From Terrorism List
By Jasmine Bailey
By Jasmine Bailey
April 9, 2015
The State Department recommended Cuba be removed from a U.S. terrorism list, another step in restoring diplomatic ties between the countries.
SHOW TRANSCRIPT

Thursday brought another milestone in U.S-Cuba relations, as the State Department sent the White House recommendations to remove the county from the State Sponsors of Terrorism list.

Present Obama has not yet announced an acceptance of the recommendation, but while on a one-day trip to Jamaica following the announcement, he did have this to say:

"There's a process involved in reviewing whether or not a country should be on the state-sponsored terrorism list. Our inner agency team will go through the entire thing and present it to me. That hasn't happened yet."

Cuba shares a spot on the terrorism list with Iran, Sudan and Syria.

And Cuba's removal from the terror list was one of its demands in the ongoing talks to normalize relations between the two countries. The change could clear an avenue for the two nations to open embassies.

But the possibility of Cuba's removal from the terrorism list isn't going over well with all U.S. lawmakers.

One reason for friction: Cuba still provides asylum for some of the U.S.'s most high-profile fugitives, including Joanne Chesimard, one of the FBI's most wanted terrorists, along with members of terrorist organizations like the Revolutionary Armed Forces of Colombia.

One of the most vocal opponents of Cuba's removal from the terrorism list has been Florida Sen. Marco Rubio, who has Cuban roots. Last month Rubio sent a letter to Secretary of State John Kerry.

It said, in part, "The Castro regime harbors terrorists who have killed Americans, actively supports designated Foreign Terrorist Organizations by harboring their members and continues to flout international law through clandestine weapon transfers with a rogue regime like North Korea."

The two nations have maintained close ties for decades, both housing embassies in the others' capital. And multiple times, Cuban weapons have been found on North Korean ships heading back to the Hermit Kingdom.

​But it doesn't seem that those concerns will halt an effort to continue mending ties between the U.S. and Cuba. If Obama does accept the recommendation to remove Cuba from the terrorism list, Congress would have 45 days to decide if it will override the decision.

Obama and Castro are expected to meet during the Summit of the Americas in Panama City Friday. It would mark the first meeting between U.S. and Cuban leaders since 1956.