Americans Take Even Fewer Vacation Days Than You Think 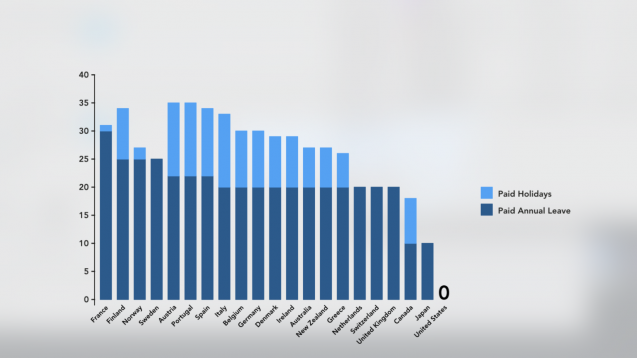 SMS
Americans Take Even Fewer Vacation Days Than You Think
By Kate Grumke
By Kate Grumke
August 17, 2015
U.S. workers aren't guaranteed any vacation days. But even of the days they're given, Americans often don't take them all.
SHOW TRANSCRIPT

The U.S. only has 10 federal holidays. But workers don't have to be paid, even if they do get the time off.

Even though the U.S. doesn't have any government-mandated vacation time, the average American worker does get some time off. (Video via Expedia)

But that's just the average. About 1 in 4 U.S. workers get no paid time off at all.

Here's the thing — even though we have far less, we don't seem to want more.

A Skift survey found 42 percent of American workers didn't take a single day of vacation in 2014. An Oxford Economics study found Americans only use 77 percent of their vacation time.

So campaigns like these are likely falling on deaf ears.

But vacation does have benefits. Studies have shown vacation actually benefits the workplace. It even leads to more productive workers.