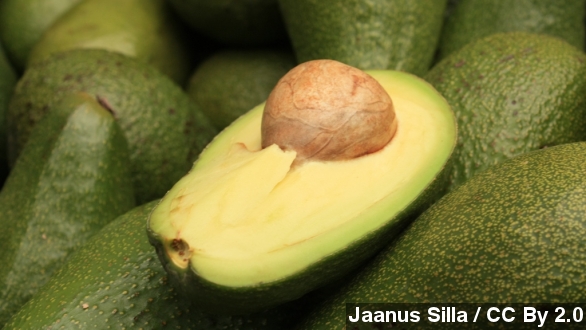 SMS
Americans Just Can't Get Enough Avocados
By Ben Lawson
By Ben Lawson
February 2, 2015
Spikes in the number of avocados consumed in the U.S. and an appearance in a Super Bowl commercial are testaments to the fruit's surging popularity.
SHOW TRANSCRIPT

One fruit is on a quest to take over America, and it's winning. The avocado has become incredibly popular in the U.S. and shows no signs of slowing down.

It even had a pretty hilarious Super Bowl commercial. A Hass Avocado spokesman said it might have been the "first time any produce ... has ever been advertised during the game."

"With the next pick in the first draft ever ..."

"Great pick. That makes a ton of sense."

Hass Avocado accounts for 95 percent of all avocados sold in the U.S., with 1.9 billion pounds or 4.25 billion avocados sold last year. That's four times the amount sold in 2000.

Helping along the fruit's popularity were studies suggesting that avocados are pretty good for you. One study revealed eating an avocado a day improved overall diet quality and nutrient intake. Another said, it could help the heart by lowering cholesterol. (Video via Avocados From Mexico)

So major restaurant chains were quick to work avocado or guacamole dishes into marketing campaigns. (Video via Panera Bread)

A Subway ad featured the fruit:

"Have you met my first-born son, Avocado?"

And last year, people got a little freaked when reports of an avocado shortage threatened Chipotle's supply of guacamole.

Those rumors were completely unfounded, but it shows how ingrained the avocado has become in some people's diets, after becoming a mainstream food item just a few years ago.

That's because Mexico, the world's largest avocado producer, wasn't allowed to export the fruit to the U.S. until the late 90s, when the government began to slowly lift burdensome regulations, according to The Washington Post.

Eighty-five percent of avocados sold in the U.S. last year were grown outside the country.

This video includes images from Getty Images and Jaanus Silla / CC By 2.0.