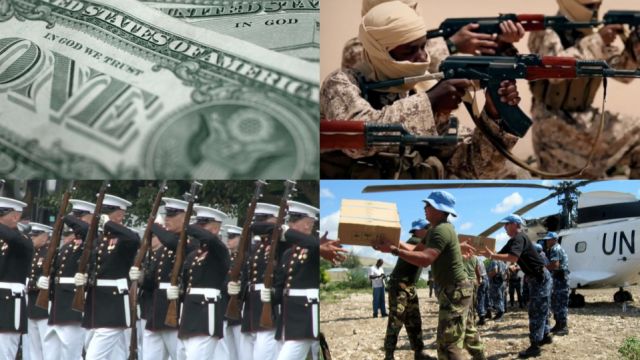 SMS
Americans Are Split On What Role The US Should Play On The World Stage
By Briana Koeneman
By Briana Koeneman
May 6, 2016
A Pew Research Center report found that Americans are deeply divided when it comes to their opinions on U.S. involvement in global affairs.
SHOW TRANSCRIPT

Americans seem to be deeply divided about what role the U.S. should play in international issues.

That's according to a report from the Pew Research Center released Thursday. The center surveyed more than 2,000 U.S. voters on the global issues shaping the 2016 presidential election.

According to the research, when it comes to U.S. involvement in the global economy, 55 percent of Republicans say it's a bad thing, compared to 44 percent of Democrats who hold the same belief.

And those who say they support presumptive GOP presidential nominee Donald Trump are the most opposed to American involvement in the world economy, with 65 percent saying it "lowers wages and costs jobs."

Which isn't too far off from what Trump has said.

As for global threats, the majority of those polled agree on the main dangers facing the U.S. — ISIS, foreign cyberattacks and global economic instability.

But there's some major disagreement between political parties on other perceived dangers. Seventy-seven percent of Democrats view climate change as a "major threat," while only 26 percent of Republicans feel the same way.

And 74 percent of Republicans say refugees from Iraq and Syria are a "major threat," compared to just 40 percent of Democrats with the same response.

And finally, over half of all the participants in the poll — Republicans and Democrats — say they believe the U.S. should "deal with its own problems" instead of focusing on foreign aid.

The Pew Research Center's poll was conducted between April 12 and April 19 among a national sample of American adults.

This video includes clips from Donald J. Trump for President Inc., Hillary for America, Bernie 2016 and PBS NewsHour and images from Getty Images.