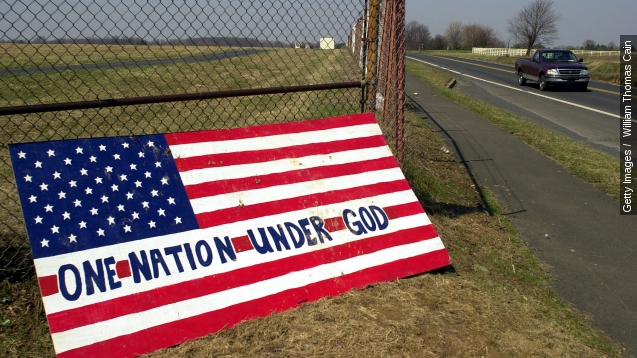 SMS
Americans Are Becoming Less Religious, Says New Poll
By Ryan Biek
By Ryan Biek
November 3, 2015
The one nation under God is apparently becoming less religious, according to a new poll from the Pew Research Center.
SHOW TRANSCRIPT

The one nation under God is apparently becoming less and less religious.

The Pew Research Center reported Tuesday 23 percent of American adults in 2014 said their religion was atheistic, agnostic or "nothing in particular." It's a 16 percent increase in unaffiliated adults in just seven years.

The percentage of Americans who say they're "absolutely certain God exists" dropped 8 percent during the same time frame, to 63 percent of American adults.

Pew also reports the percentages for those who pray daily, attend religious services regularly and consider religion an important aspect of their lives dropped by a small, but significant, amount.

Even within religious groups, though, there have been some significant changes.

For instance, almost every Christian denomination showed a higher percentage of followers believing homosexuality should be accepted by society.

A majority of unaffiliated adults said they still believe in God.

And although the percentage of all adults who believe in God dropped from 92 to 89 percent, Pew reports it's still a much higher percentage than in most industrialized nations.

This video includes images from Getty Images and Lawrie Cate / CC BY 2.0.