'American Sniper': The Truths And Myths About Chris Kyle 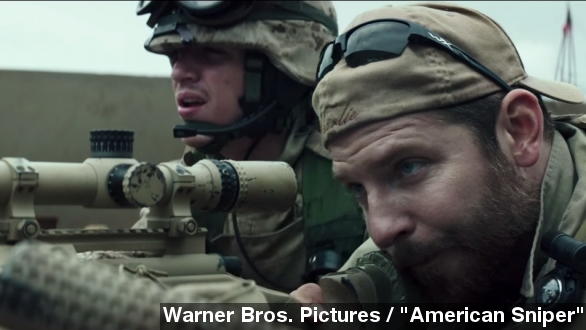 It seems since its Christmas Day release — Clint Eastwood's film "American Sniper" based on the life of Navy Seal Chief Petty Officer, Chris Kyle — has continued to be the subject of both criticism and praise.

So how accurate was Bradley Cooper's portrayal of Kyle? We'll dispel some of the myths and make a few notes about what the movie left out. Warning: Lots of spoilers ahead.

Chris Kyle's autobiography "American Sniper: The Autobiography of the Most Lethal Sniper in U.S. Military History" was the basis of much of what we saw in the movie. It's worth noting why Chris Kyle decided to write "American Sniper"; his widow Taya Kyle explained the decision at the 2013 National Rifle Association conference.

"Chris only wrote that book because other people were going to write it about it and he felt proper credit wouldn't be given to those he served with. He also knew he could be portrayed as something he wasn't."

So, on to the movie. Much of the first half of "American Sniper" is built around Chris Kyle's first kills: a little boy and his mother who were trying to throw a grenade at a group of Marines.

Of his 160 confirmed kills, Kyle might have killed a child or children, but he doesn't mention it in his book. However, he did explain shooting and killing a woman who was holding her toddler.

Kyle told Time, "I had to do it to protect the Marines, so do you want to lose your own guys or would you rather take one of them out?"

"When I'd go into a house when we occupied the houses, I'd take my uniform off and you could see my tattoo. ... If someone was killed by a sniper in the area they associated that with me," Kyle told Conan.

What about the movie's main antagonist, the Iraqi sniper called Mustafa? Well, it's not completely clear how much of a role he actually played during Kyle's four tours in Iraq and Time notes Mustafa wasn't mentioned in the book. When asked why, Kyle said: "He shot my friend. I’m not going to put his name in my book." In the movie Kyle manages to kill Mustafa, but Time reports that kill was never confirmed.

On a lighter note, there's a scene in "American Sniper" right after Kyle joined the Navy where he meets Taya, his wife, in a bar. Taya talked about that real life moment during an interview with Fox News.

Gretchen Carlson with Fox News asked, "So the first scene, when you meet Chris and do the shots, really happened?"

Kyle and his friend Chad Littlefield were killed at a shooting range in 2013. The man who shot and killed the two, Eddie Ray Routh, is a veteran who suffers from PTSD; Kyle was helping Routh through treatment. Routh's trial is set to begin in February.

So far, the film has racked in more than $154 million domestically and is nominated for best picture at the Academy Awards.