American Indians Stand Together To Shut Down Pipeline Project 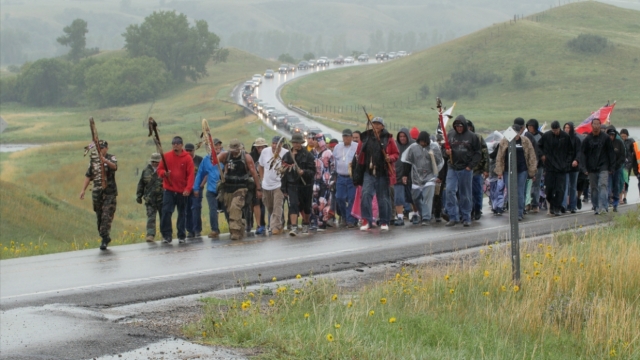 SMS
American Indians Stand Together To Shut Down Pipeline Project
By Kate Grumke
By Kate Grumke
August 21, 2016
Indigenous activists from the Dakotas — and even other states and countries — are halting construction on this oil pipeline project.
SHOW TRANSCRIPT

American Indians want to shut down a new oil pipeline.

"The last time the seven bands of the Lakota-Dakota-Nakota nation stood together was at the Battle of the Greasy Grass (Battle of the Little Big Horn), June 25, 1876. So this is historic that they answered that call," said Jon Eagle Sr., Tribal Historic Preservation Officer for the Standing Rock Sioux Tribe.

Outside of Cannon Ball, North Dakota, the construction site for the Dakota Access Pipeline is visible — but work has stopped because of the protests.

"We have had incidents and reports of weapons, of pipe bombs, of some shots fired," Morton County Sheriff Kyle Kirchmeier said.

Eagle thinks law enforcement misinterpreted what people were saying on social media. He said they were talking about sacred pipes, not pipe bombs: "When we say we're loading our pipes, that's our chanupa. That's a sacred object that we carry to communicate with everything within creation. It's not a weapon."

The $3.8 billion pipeline is supposed to run from oil fields in North Dakota to Illinois. It doesn't quite cross through the Standing Rock reservation, but it will cross the Missouri river less than a mile from the reservation.

"None of our water comes from anywhere else — it's just all from the Missouri river," said Spud Medicine Horse, who is from the Standing Rock reservation and is half Lakota, half Cree. "It's just overwhelming, and I guess that we're scared. It's threatening not just us but our future generation."

The people here are worried that if the pipeline were to leak, it would pollute the Standing Rock Reservation's water source — and possibly other reservations that are also downstream.

More than a dozen people have been arrested so far, including the Standing Rock Sioux Tribe's chairman.

And the oil company is suing the protesters in federal court.

In a statement, the company told Newsy the pipeline is accordance with the law. The statement also said, "This is an important energy infrastructure project that benefits all Americans and our national economy."

The Standing Rock Sioux Tribe also filed a separate lawsuit in D.C. district court against the Army Corps of Engineers for approving the project.

"This is our aboriginal territory," Young said. "So where we are today is the Army Corps taken area, but we own the mineral rights and we own the river bed. And I hate to say own because it's not in the American sense of owning. We have our own word, which is the collective ownership."