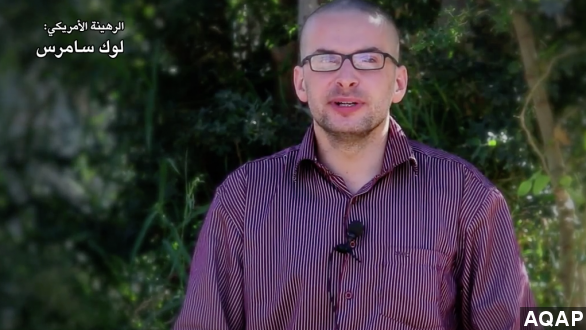 U.S. officials are condemning the murder of 33-year-old American photojournalist Luke Somers, killed by militants in Yemen on Friday.

“My name is Luke Somers …  I’m looking for any help that can get me out of this situation. I’m certain that my life is in danger,” Somers said. (Video via YouTube / ع مجاهد)

Al-Qaeda in the Arabian Peninsula, or AQAP, released that video Thursday. The group abducted Somers a year ago in Sanaa while he was working there as a freelance journalist. (Video via Terrorism Research & Analysis Consortium)

Al-Qaeda's Yemeni affiliate had threatened to kill Somers if its unspecified demands were not met in three days time.

According to outgoing Defense Secretary Chuck Hagel, the U.S. went forward with a rescue operation on Friday when “there were compelling reasons to believe Mr. Somers' life was in imminent danger."

Aside from that, there are few details of the actual operation. Though, The New York Times reports Somers was shot by his captors and died from his injuries while being moved to a U.S. naval ship.

His death comes two days after the Obama administration acknowledged an earlier rescue mission had also failed when the militants moved Somers to a new location. “Regrettably, when the operation was executed, Luke was not present,” White House Press Secretary Josh Earnest said.

“Please show mercy and give us an opportunity to see our Luke again. He is all that we have,” Paula Somers said. (Video via YouTube / أحمد عبدالرحمن)

A second hostage — a South African teacher — died in the rescue operation as well. The charity negotiating his release said he was supposed to be released this weekend.