'American Dream' Mega Mall Would Be The Biggest In The U.S. 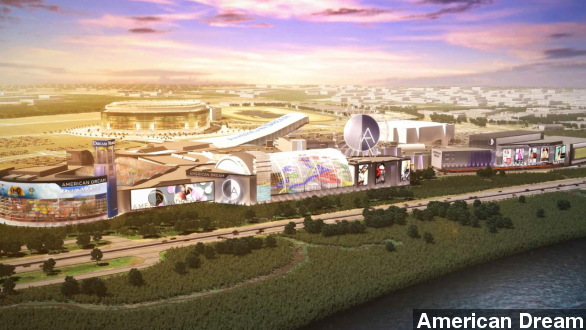 SMS
'American Dream' Mega Mall Would Be The Biggest In The U.S.
By Evan Thomas
By Evan Thomas
March 6, 2015
Triple Five, developer of Minnesota's Mall of America, is proposing an even larger shopping attraction in a Miami suburb.
SHOW TRANSCRIPT

Triple Five, the developer behind the Mall of America in Minnesota, wants to build an even larger shopping and entertainment complex in Miami-Dade in Florida.

The proposed mega mall would carry a $4 billion development cost and create some 25,000 new jobs if it were completed. Triple Five has dubbed it "American Dream Miami."

"It sure is a dream for shoppers. But this mall will also boast water slides, thrill rides, dinosaur attractions, live entertainment shows and glow-in-the-dark putt-putt," said WSVN's Kevin Ozebek.

Triple Five hasn't confirmed the new mall's size, but county officials say it would be larger than Mall of America's 4.2 million square feet. That mall brings in about 42 million visitors a year …

…and remains popular enough the terrorist organization al-Shabaab reportedly designated it in February as a potential target for attack. (Video via The Wall Street Journal)

These days, smaller malls are less likely to claim the same popularity. While this ostensibly lowers the chances of violent terrorism, it’s also not good for their economies.

“There are roughly 1,200 indoor malls in the United States, and only about a third of them are doing well, thanks to a variety of factors that have transformed the economy in recent years,” NPR’s Steve Inskeep said last year.

Online commerce is taking a larger bite out of the traditional mall’s retail market share every year.

And the recession caused big anchor retailers to stumble, speeding some smaller shopping centers on the way to becoming so-called Dead Malls.

But all is not lost, says one Gallup analyst. “People are still shopping; it's where they are shopping that is shifting. Lifestyle centers, for example, are growing.”

And for what it’s worth, American Dream Miami is lifestyle writ about as large as possible. Triple Five has yet to detail when it proposes to start construction.