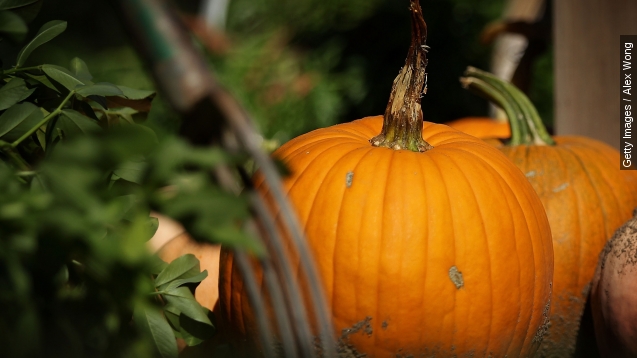 SMS
America, We Might Have A Pumpkin Problem
By Samantha Crook
By Samantha Crook
October 7, 2015
Some pumpkin growers are worried if spring and summer rains will hurt the pumpkin supply. The fall favorite may be harder to find in stores this year.
SHOW TRANSCRIPT

Pumpkin supply concerns are growing across the country because of heavy spring and summer rains.

Illinois, the country's largest producer of pumpkins, is especially concerned.

Heavy rains caused a lot of pumpkins to rot and washed out seeds. (Video via WQAD)

Libby's, a manufacturer of canned pumpkin, is located in Illinois in an area that was hit hard. (Video via Nestlé)

The company is owned by Nestle, which says it expects to ship the last batch in mid-November, and it won't have more until next summer's harvest. (Video via Nestle)

So you're probably fine if you want pumpkin pie at Thanksgiving if you don't wait until the last second to shop. But it's probably a good idea to stock up for Christmas.

Nestle also said the price of canned pumpkin is up this year, but that was already planned before the harvest issues. (Video via Nestle)

Sadly, the shortage comes after the Illinois House voted earlier this year to make pumpkin pie the official state pie.