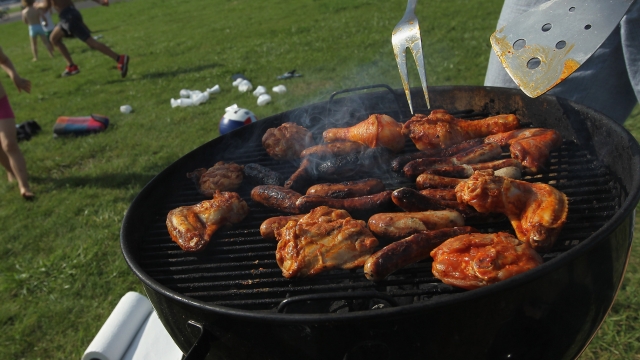 SMS
America's Meat Obsession Isn't Great For The Environment
By Kate Grumke
By Kate Grumke
July 1, 2016
You might've heard that a pound of meat takes about 2,500 gallons of water to produce. Here's why.
SHOW TRANSCRIPT

America loves its meat. But all that beef and brisket comes at a high price for the planet.

That's because the way much of the world raises livestock requires tons and tons and literal tons of natural resources.

The age-old way to raise cattle — and the environmentally friendly way — is to grassfeed them. But our growing demand for beef means cattle have to be fattened up at an unnatural pace. Rather than grass, the majority of the cows in the U.S. are eating corn and other grains.

All the livestock in the U.S. consume as much as five times as much grain as the entire U.S. population consumes. That takes a lot of water. In fact, by some estimates, a pound of meat takes about 2,500 gallons of water to produce.

And all that water consumption is pretty intense when you put it into context. In the U.S., total agriculture accounts for about 80 percent of our water usage.

"The governor says Californians need to change the way they live," NBC reported.

Which is why it's strange that so much talk of water conservation is about watering our lawns or taking showers and not about all that water used for raising livestock.

This video includes clips from Wyoming PBS and images from Jake Dunham / CC BY 3.0, Creative Stall / CC BY 3.0 and Artem Kovyazin / CC BY 3.0. Music provided courtesy of APM Music.