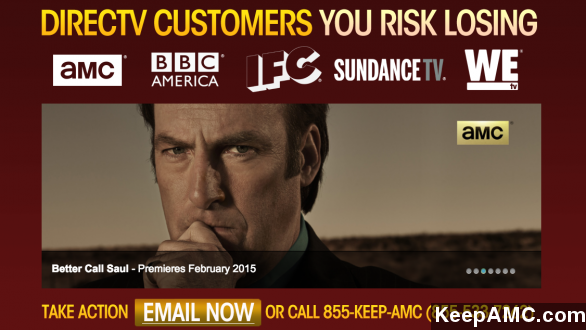 SMS
AMC Pits Fans Against DirecTV Amid Contract Negotiations
By Ben Lawson
By Ben Lawson
November 3, 2014
The cable channel is tapping into the huge fan base for "The Walking Dead" to gain leverage in its dispute with DirecTV.
SHOW TRANSCRIPT

AMC is in some pretty rocky contract renegotiations with DirecTV, and apparently things have grown so tense, the network is enlisting some help.

Although it didn't mention DirecTV by name on air, AMC ran ads during commercial breaks and graphics during Sunday night's episode of "The Walking Dead" warning viewers they're at risk of losing both AMC and "The Walking Dead." Viewers were directed to a hotline and a website called KeepAMCNetworks.com.

The website is a bit more specific — it warns DirecTV customers could miss out on AMC, BBC America, IFC, Sundance TV and WE TV, which are all part of AMC Networks.

The Hollywood Reporter quotes a statement from AMC that reads: "We hope to finalize a new agreement quickly, but in the meantime, we think it is important to alert DirecTV customers who care about The Walking Dead that their ability to watch the show on DirecTV is at risk."

The statement also accused DirecTV of being in violation of its contract with AMC by dropping the network in Latin America.

AMC's contract is set to expire midway through the current season of "The Walking Dead," which is scheduled to take a midseason break at the end of November and pick up again in February.

As Bloomberg points out the network is essentially using "The Walking Dead's" passionate fans as "weapons" in the talks. And, quite frankly, they're well-armed. The season five opener of the show pulled in 17.3 million viewers.

This is actually on old trick for AMC. It did the same thing with its megahit show "Breaking Bad" over contract negotiations with Dish Network in 2012. AMC did wind up going dark on that service for about three months before reaching a deal.

But in its own statement, DirecTV says, "Don't let AMC scare you!" explaining the network is contractually obligated to provide its programming for several more months and that DirecTV intends to renew the partnership.

Deadline speculates DirecTV execs might be in a hurry to reach a deal anyway, explaining that they might not want to engage in a high-profile fight while the Justice Department and Federal Communications Commission consider AT&T's planned purchase of the company.

Neither side has said what specifically is holding up the contract negotiations.

This video contains music from Pierlo / CC BY 3.0.