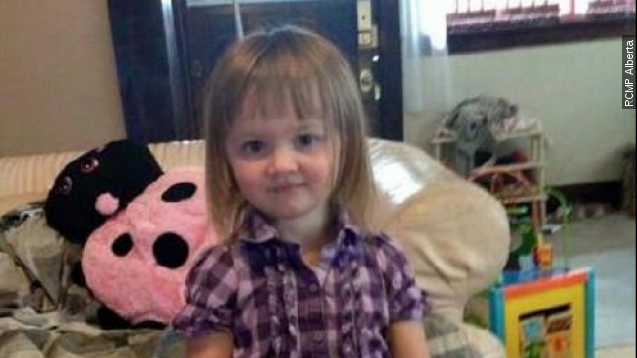 SMS
Amber Alert Still In Effect For 2-Year-Old Girl In Canada
By Katherine Biek
By Katherine Biek
September 15, 2015
Authorities believe Hailey Dunbar-Blanchette was abducted from her Alberta home. Her father was found dead inside the home.
SHOW TRANSCRIPT

An Amber Alert is still in effect in parts of Canada for a 2-year-old girl who authorities believe was abducted from her home around 3:30 a.m. Monday.

Hailey Dunbar-Blanchette's father, Terry Blanchette, was found dead inside their Alberta home, and CTV reports a white van was seen driving away from the home early that morning.

After confirming Hailey was not with her mother, who lives about five hours away in Edmonton, the Canadian police issued an Amber Alert for the Alberta area.

Throughout Monday, that Amber Alert was extended to Saskatchewan and British Columbia, and part of Montana.