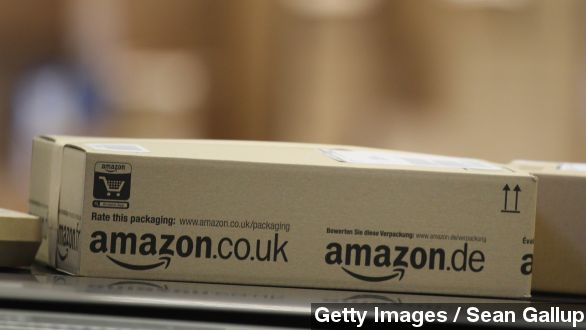 SMS
Amazon UK Glitch Prices Items At A Penny, Costing Businesses
By Jamal Andress
By Jamal Andress
December 15, 2014
Smartphones, TVs and mattresses were offered for a penny each on Amazon's UK site. The glitch lasted for an hour Friday.
SHOW TRANSCRIPT

Tech giant Amazon is facing major criticism from small businesses all over the U.K. after a technical glitch Friday gave Amazon customers an early Christmas gift.

Smartphones, TVs, mattresses — all being offered for a penny on Amazon's U.K. site. The unintended "megasale" lasted for about an hour Friday from 7 to 8 p.m. Customers bought thousands of dollars worth of items from small businesses selling through the site, costing many most, if not all, of what would have been their holiday-season haul. (Video via ABC)

The glitch involves a service called RepricerExpress, which can automatically change the price of items being sold on Amazon to help that business's product stay competitive in the market.

But according to Fortune, the online tool "generated a self-reinforcing loop in which goods were automatically re-priced down to a penny."

Because this service is used primarily by small businesses, a hit like this could send many into closure for the new year.

The Amazon seller forum blog is full of independent sellers and small business owners explaining how they lost thousands of dollars worth of inventory in one hour.

While some orders have been cancelled by Amazon or the small business owners, Amazon says it is unable to cancel orders that have been charged to the customer's account. (Video via The Guardian)

RepricerExpress put out a statement apologizing for the expensive tech glitch: "We are continuing to work to identify how this problem occurred and to put measures in place to ensure that it does not happen again. … Everyone here is devastated and disappointed that you have experienced this problem."

Amazon says it will be reaching out to the small businesses who could not cancel the incorrect orders made Friday. The tech giant has not said whether it will cover those various businesses' losses.