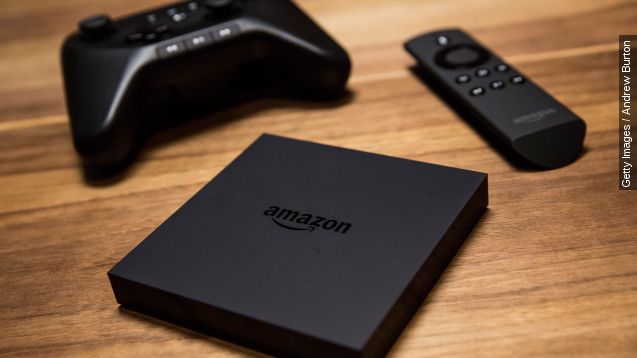 SMS
Amazon Ridding Site Of Apple And Google Streaming Devices
By Katie Link
By Katie Link
October 2, 2015
Amazon announced Thursday it will no longer sell Apple or Google streaming devices. Is that a smart defensive move or a bad business decision?
SHOW TRANSCRIPT

If you're looking to buy an Apple TV or Google Chromecast on Amazon, you better get on it — you only have a month.

"But this new Amazon Fire TV listens to me, and does exactly what I say," Gary Busey said during an Amazon ad.

Google's Chromecast is the sixth most popular device in the electronics section of Amazon's website, and Apple TV is No. 14. And Amazon executives aren't happy with the competition. (Video via Google and Apple)

Amazon sent an email to consumers that says, "Over the last three years, Prime Video has become an important part of Prime. It's important that the streaming media players we sell interact well with Prime Video in order to avoid customer confusion."

But a lot of confusion seems to be stemming from the "anti-competitive" move by the company.

"It gives the appearance of being a little less than friendly for consumers who want to get on Amazon and kind of buy whatever they want," Bloomberg editor Tom Giles said. (Video via Bloomberg)

Amazon is the largest Internet-based retailer in the U.S. and has reason to get territorial over streaming services. According to an August study, the four most popular streaming services make up 86 percent of the market share. In the year since Amazon released its Fire TV and Fire TV Stick, the products have already leapfrogged Apple's device.

While the company plays defense and freezes out Apple and Google products, it will continue to sell Roku devices, along with Xbox and Playstation consoles. Amazon says they all work with Prime Video.