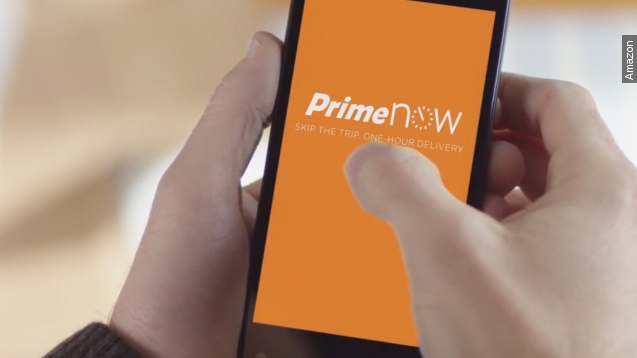 SMS
Amazon: On-Demand Food With Your On-Demand Booze?
By Mikah Sargent
By Mikah Sargent
August 26, 2015
Amazon launched its one- and two-hour delivery service, Prime Now, in Seattle. The company might be experimenting with on-demand restaurant delivery.
SHOW TRANSCRIPT

In case you missed it, Amazon is putting its one- and two-hour delivery service, called Prime Now, to good use by offering Seattle-based customers on-demand beer, wine and hard liquor.

But according to GeekWire, Amazon isn’t stopping there. The company seems to be taking on the likes of GrubHub with on-demand food delivery. (Video via GrubHub)

"[Amazon] has been testing the service by allowing its own employees to order meals from restaurants. … Several new Prime Now drivers tell GeekWire they’re the same ones handling restaurant deliveries."

Basically, customers will be able to use the Amazon app to order to-go meals. Amazon's zippy Prime Now drivers would be tasked with picking up the meal from the restaurant and getting it to the customer.

Now, on-demand food delivery is quite a project to take on — not only are there loads of other food-delivery startups out there, but the logistics involved can get complicated pretty quickly. (Video via Postmates)

But if we're being honest, Amazon is one of the first companies that comes to mind when we hear the word "logistics." As a writer for Business Insider notes, "Amazon, which has its own fleet of delivery trucks, has lots of experience with logistics and distribution."

Exactly, its business is logistics and distribution. And for a company that wants to offer everything from A to Z, it's no surprise Amazon is getting into the food-delivery game. So long as you're in one of Amazon's select cities, for $99 a year you can get one- or two-hour deliveries of all kinds of goodies. (Video via Amazon)

But let's focus on what's truly important here: If you live in Seattle, you can get a bottle of your favorite red wine paired with your favorite Italian dish from a local restaurant — in an hour. Welcome to the future, friends.