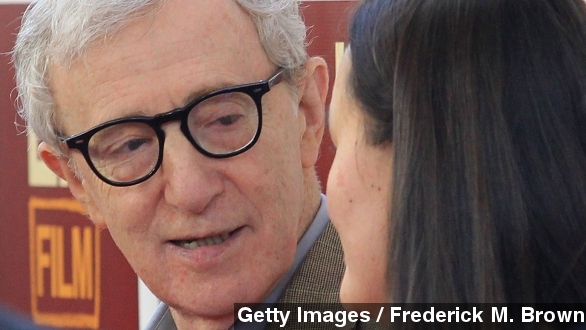 A few Golden Globe wins in, and Amazon's landed a massive movie director for its next original series.

"A relationship, I think, is like a shark, you know? It has to constantly move forward or it dies." (Video via United Artists)

Yes, Woody Allen. Fresh off history-making Golden Globes wins on Sunday, Amazon announced Tuesday it had signed Allen to helm a half-hour series. And this will be history-making for Allen — he's never directed a TV show before.

The show has no name yet but did receive a full-season order. We know Allen will be both writing and directing, which is pretty typical of how he works. The series will be available through Amazon Prime Instant Video in the U.S., U.K. and Germany. (Video via TIME, United Artists)

It's unclear exactly what about Amazon hooked Allen for the series, but he quipped in a statement, “I have no ideas and I’m not sure where to begin. My guess is that [Vice President of Amazon Studios] Roy Price will regret this.”

Ideas or not, snagging Woody Allen for his first series is obviously a huge win for Amazon. That level of name recognition is new for the streaming service — until now, its biggest stars were John Goodman and Jeffrey Tambor.

For a company that's trying to rival Netflix, this is huge. Truly, for any company anywhere, this would be huge.