Amazon Complains U.S. Is Too Slow To Regulate Drones 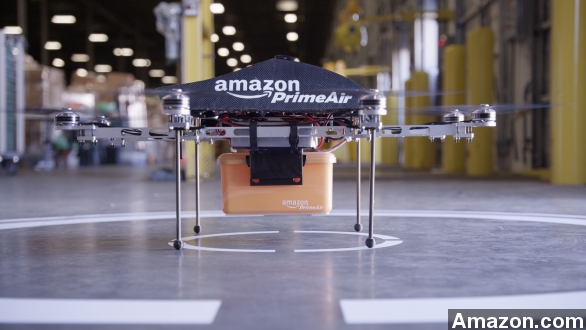 SMS
Amazon Complains U.S. Is Too Slow To Regulate Drones
By Evan Thomas
By Evan Thomas
March 25, 2015
Days after getting approval to test certain commercial drones, Amazon says the Federal Aviation Administration is dragging its feet on the matter.
SHOW TRANSCRIPT

Amazon is taking the Federal Aviation Administration to task for dragging its feet on drone approval.

Amazon obtained special permission from the FAA to test commercial drones last week. Company officials still aren't happy, saying the process in the U.S. is too slow compared to the rest of the world. (Video via ABC)

According to Paul Misener, Amazon's vice president for global public policy, approvals outside the U.S. can take less than two months. Amazon had to wait six months for FAA approval.

"While the FAA was considering our applications for testing, we innovated so rapidly that the UAS approved last week by the FAA has become obsolete. We don't test it anymore. We've moved on to more advanced designs that we already are testing abroad," Misener said at a Senate hearing Tuesday. (Video via C-SPAN)

Those would limit drones to line-of-sight operation only, a 500-foot flight ceiling, a 100 mph speed limit and would prohibit flying over other people. Needless to say, that would make it difficult for Amazon to operate any significant delivery service. (Video via Newsy)

Margaret Gilligan, FAA associate administrator for aviation safety, says the U.S. has to be more careful because of its relatively crowded airspace. (Video via Air Line Pilots Association, Int'l)

A writer at PCWorld explains that's "Partly as a result of fewer regulations on flight, private aviation is a much more active field here, and that means greater risks when drones enter the airspace."

There are indications Congress might speed up the process. Forbes reports New Jersey Sen. Cory Booker could soon submit legislation that would expand drone permissions to more businesses while the FAA works on finalizing its own rules.

But it appears the rules governing the distance, altitude and speed of drones would remain unchanged in Booker's version, so it's not clear how useful that could be to Amazon.

"Amazon did say they have now applied for what they call an experimental certificate for a new drone design they're testing. But again, if this takes six months, we have to imagine Amazon may be moving on from this one by that time," said The Wall Street Journal's Jack Nicas.

The FAA's existing rule proposal is subject to public comment and change through April 15.